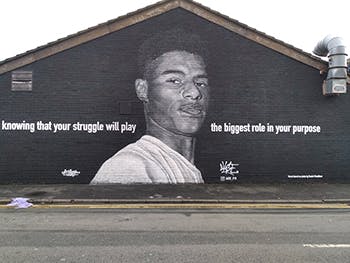 Street art like the Marcus Rashford mural in Manchester still offers a crucial medium for the public to express solidarity and hope at times of adversity, says academic.

The human desire to leave tributes at the Marcus Rashford portrait in Manchester, following racist vandalism of the work, suggests graffiti and street art is still one of the UK public’s most immediate way of sharing in collective grief during times of national adversity, a graffiti and built environment expert has said.

Emma Love, Senior Lecturer in the Built Environment and PhD researcher in graffiti as a place-making and cultural heritage tool within the built environment at Birmingham City University, suggests that the huge outpouring of support at the Withington location of the England footballer's homage by artist Akse points to a desire to physically share thoughts and hope during major moments of pain and hurt.

The academic cites ‘Tourists out, no to second homes’ graffiti in Devon and Cornwall, public written messages of loss around Grenfell, and the 150,000 crowd-generated hearts on the National Covid Memorial Wall in London as examples of the need to make public statements using the most basic of methods – writing on a wall.

Graffiti is often the most direct and impactful tool used to make a point unlike any other. We see that despite being regularly seen as vandalism or criminal damage, graffiti is often the first channel of communication, for both experienced graffiti writers and the general public alike, at moments of collective adversity and grief.

Here are four moments, chosen and written by Emma Love, where graffiti helped us to express hope at times of national adversity:

“In a real-world development following the appalling online abuse directed at three young members of the England football team, a street portrait celebrating Marcus Rashford - known not just for his amazing football ability but also for his change-making abilities around government policy on school meals for children – was vandalised with an offensive scrawl.

“Almost immediately the damage was covered with handwritten notes, glued straight over the racist graffiti, encouraging love, and respect and thanks to Marcus.

“The tributes continue to grow – not only covering what lies beneath but, in a show of the true depth of gratitude and respect of the local community, far exceeds the size and certainly now weakened message of hate the portrait was damaged with.”

“Graffiti in the UK is rarely used to mark territory, most often associated with and widely used throughout the Los Angeles area of the USA.

“Specific area marcations are often intrinsically linked with violence - driven by an anger from those that wish to protect their perceived ‘patch’.

“However angry local UK communities have also recently used graffiti to get a message directly to those whom they perceive as making an invasion of their lands from ‘outsiders’, particularly those with an intent to purchase a ‘second home’ in the area.

“The popularity of Cornwall and Devon, in particular for investment homes, has created huge unrest locally and the anger has literally spilt onto the streets with messages such as ‘tourists go home’ seeing additions of, ‘and second homeowners also’.

“Whilst tourists and second homeowners are not new in these picturesque places of contentment, the desire to protect communities from the spread of Covid through an upsurge in cases via unnecessary visitors is.

“The frustration from those who live there all year round is palpable in their unusual actions.”

Acknowledgement of loss and a plea for action

“Graffiti has also been used continuously as a reminder of the tragedy which occurred in West London, on Wednesday 14 June 2017.

“The awful events leading to the loss of life in Grenfell Tower, Kensington left not only the local community broken, but left a scar across the nation’s collective consciousness.

“Understanding how such a large scale loss of life could occur in a modern age of safety was incomprehensible. Many felt at a loss how to show support, especially when sending spare clothes and bedding, or supporting the various funding pages did not feel like sufficient enough following such a catastrophe.

“Walls around the area where the tower once stood became an area for many to write their thoughts, send their prayers or simply state they have visited to express their sadness.

“Trellick Tower, a local tower block in close proximity to the Grenfell site, was covered in messages of love, outpourings of grief and questions of “Why?”, “How?”, and “What now?”.

“Alongside the messages of grief, were the names and stories of the families and individuals who had lost their lives, reminding all that this graffiti was not only acting as a portal and space for public grief but also serving as a very real reminder of the loss of real humans, real lives.

“Similarities could be drawn from this not only to the graffiti which surrounded the areas of Lower Manhattan in 2001 following the devastating loss of the Twin Towers but also in the UK in recently discovered church graffiti where family members wrote the names of their children lost through the plague dating and around 1515, into their local places of worships.

“Many of the walls from the Twin Towers area were removed and now form part of the permanent Memorial World Trade Centre Exhibition, acting as a solid reminder of the power of the written word on a wall.”

“Perhaps one of the most poignant uses of collective graffiti is the recent addition of approximately 150,000 hearts in London’s South Bank.  Over 500 meters of small red hearts, added in the most part by the general public, symbolise a single loss of life from Covid-19 each.

“The project was started by Matt Fowler, who began by painting 15,000 hearts after losing his father to the disease in April 2020.

“The overwhelming gesture of support from members of the public, who marked a simple heart, led to the work being declared as the National Covid Memorial Wall.

“It is hoped that this wall will be preserved as a form of remembrance for the collective loss we endured a nation but also serve as a reminder that a mark on a wall often has a purpose as well as a place in our society.”