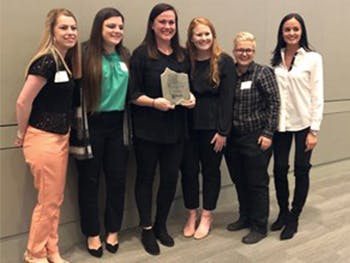 An all-women student team, comprising three CEBE students and three from BCU exchange partner Auburn University, has won an international design build competition within a sector that has been traditionally dominated by men.

The annual competition took place from 23 to 25 February in Auburn, Alabama, and Dallas, Texas, and involved a week of preparation prior to the contest itself.

The Associated Schools of Construction, Region 5, International Design Build Competition involved sponsors Texo and Beck Group, both US construction companies, tasking students to come up with a proposal for the professional design and construction of the Eagle Ford Natural Sciences Museum in Texas. The teams were also asked to consider how they would display a 15-ft meteor within the new museum.

Jessica Rae Smith, second-year construction manager, and Katie Kay and Jennifer Bolton, first-year and second-year quantity surveyors respectively, were the UK half of the team that won the competition, beating 27 other groups.

The 15-hour task put their problem-solving skills to the test and they were subsequently flown to Dallas to present their ideas to the US sponsors. The presentations were followed by an awards banquet where the winners were announced. One of the BCU-Auburn construction team won ‘top presenter’ while the team took home the competition trophy.

I have co-coached three teams for the International Design Build Competition with Auburn University. We have won each of these competitions outright. It was noteworthy that this year’s win was achieved by an all-female team. This is a first in the history of the competition. I've thoroughly enjoyed being part of their success.
Angela Kilby, Coach and BSc (Hons) Quantity Surveying Programme Leader

Professor Nick Morton, Head of ASC Region 8 and Head of the School of Engineering and the Built Environment, said: “One of the great joys of an international organisation, such as ASC is the unique opportunities we can provide for students to engage across borders and disciplines. It's wonderful to see our ‘home’ students achieving this success, working alongside their US teammates in a highly competitive environment and playing a pioneering role for women in construction.”

Associated Schools of Construction (ASC) is the professional association for the development and advancement of construction education. Students from ASC schools participate in international, industry-sponsored competitions, which offer the opportunity for personal and professional development, and enable students to showcase their ideas in front of employers, academics, and fellow teams.