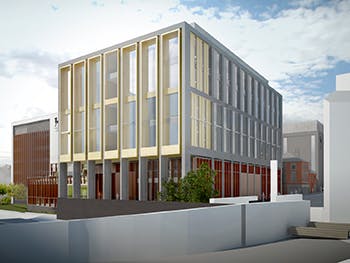 The £31 million expansion of the University's campus has taken a major step forward after the construction firm tasked with building the 100,000 square ft extension was officially named.

Birmingham City University has handed the job of constructing its new building, known as Curzon B, to Willmott Dixon Construction after a stringent tender process.

The new site will extend the University’s Curzon Building which sits on Cardigan Street, forming part of the city centre campus housed in Birmingham’s Eastside.

City Planners gave the University the green light to install the six-storey development in October last year, with the building expected to be ready for use in 2018.

Dr Paul Hartley, Interim Pro Vice-Chancellor, Birmingham City University said: “This announcement represents a major step forward in our ongoing work to transform the City Centre Campus and continue to enhance the facilities we have available for our students.

The Curzon building only opened in September but has already picked up awards and we hope that the addition of Curzon B will be just as visually impressive as well as an equally positive environment to study in.
Dr Paul Hartley

“The Eastside skyline has changed significantly in recent years to represent Birmingham’s thriving growth and this will only be further boosted with the arrival of the Midland Metro and HS2 in the future.”

Curzon B was designed by Birmingham based firm Associated Architects and will sit alongside the city’s historic canals.

The new building will be an extension to the £63 million Curzon Building, which officially opened in September 2015.

The project forms part of the £260 million transformation of the University’s expansion programme.