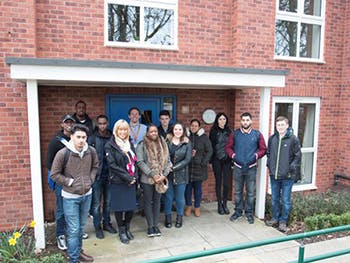 Students in the School of the Built Environment are being challenged by a Midland-based housing association to come up with innovative ways to slash the cost of building supported living homes.

As part of the ground-breaking collaboration project, 180 first year construction and engineering students are being asked to redesign Bromford’s current MyPlace model and come up with alternative concepts which cut the costs of housebuilding by up to 50%. The MyPlace model provides adults with long-term health conditions, including physical and learning disabilities, with a safe and secure home to live independently and is already one of the first schemes of its kind in England to be built without funding from Government.

The challenge kicked off in March and students have until May to investigate and report back to Bromford’s innovation lab on their ideas for the future of the housing sector.

Students visited Bromford’s Millward Place, in Birmingham, on 17 March as part of their research. Those with the best ideas – including innovative uses of land, new building techniques, design and materials – are likely to be offered internships or work placements within the organisation afterwards.

Bromford recently announced its aim to build more than 3,000 new homes over the next five years in response to the UK’s growing housing crisis.

Alex Dixon, Bromford’s director of new homes, said: “This is an exciting partnership and the students have already shown great enthusiasm so it will be fascinating to see what different ideas they come up with.

“Bromford is continually looking at innovative ways to drive down the cost of building a home which is an important part of maintaining affordability for our customers as well as ensuring we can reinvest as much money as possible into genuinely increasing the supply of new homes. What better way to shape the future of housebuilding than by listening to the next generation of professionals in our sector.”

Lecturer James Gaytten, of the University’s School of Engineering and the Built Environment, added: “I’m really pleased that we have been given the opportunity to collaborate with Bromford and it definitely gives us the opportunity to bring alive an otherwise virtual project.

“The students have been given access to some high-quality information on the MyPlace building model and on three potential development sites. Their final choice of site and subsequent proposal for a MyPlace development will also include innovations aimed at driving down the build cost so we are hoping for some really new and intriguing propositions.”

Janiel Hart, one of the first year students taking part in the project, said: “It’s quite a challenge choosing a site that would suit the target audience and there are lots of different considerations to make. I’ve decided I’m going to stick to a rectangular shape but the location of the rooms and facilities as well as the build materials is where I’m hoping to make my cost savings.

It’s really interesting and has definitely reaffirmed my view that this is the industry I want to make my career in.
Janiel Hart, BSc Construction Management