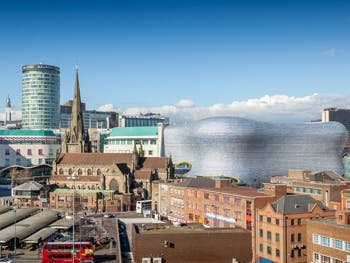 Researchers at Birmingham City University have helped develop a way of investigating or diagnosing the challenges facing their city which help improve the lives of city dwellers around the world.

The blueprint they are working with could help city policy makers and other countries to take more effective actions to boost the quality of life for residents by providing better outcomes.

Project leaders are already looking at how the work might be applied in countries like India, Brazil and South Africa.

The first part of the Urban Living Birmingham pilot project used a wide range of data and evidence used by city leaders to inform policy combined with an analysis of 248 datasets - identifying the challenges facing Birmingham.

Researchers examined datasets reflecting areas where there is a lack of communication on policy. The Urban Living pilot uses these datasets to identify the integrated nature or complexity of the challenges that face Birmingham.

Backed by the Research Councils UK/Innovate UK Urban Living Partnership, researchers have spent their first six months analysing data and evidence, discovering a unique nexus of issues that includes the following, set within the context of Birmingham’s known governance and leadership challenges.

Professor John Bryson, Professor of Enterprise and Economic Geography, said: “It’s vital to develop a diagnostic approach to identifying urban challenges before creating suitable policy.Without diagnosis of the challenges facing a city like Birmingham, the impact of actions aimed at boosting citizens’ quality of life is limited.

“Our project aims to transform how urban services and governance are delivered, so that they produce better outcomes for Birmingham people. Our citizens will help to innovate and create urban services in a way of working that can be applied in cities around the world.

“As a global ‘civic’ university, we have a responsibility to enriching the life of our home city and the wider world. We believe our efforts can make a significant contribution to helping Birmingham and other world cities meet the needs of their citizens.”

Urban services and systems covered by the project include areas such as education, health, welfare, cultural heritage, governance and ecosystem services. They also encompass ‘hard infrastructure’ services such as energy, water, sanitation, waste, and transport.

Researchers are particularly interested in enabling greater influence and involvement by the people, city residents, who use the services in shaping how they are delivered.

The project has two parts. The initial six-month phase has now been delivered and identified a number of major future challenges requiring further research in the second 11-month stage of the project:

The next phase of the project will see researchers working with people across the city to develop an alternative understanding of Birmingham's challenges and how engaging with service users and innovation can help to address the issues.

Alongside this activity, researchers will also identify future research and innovation strategies and examine project management to identify best practice.

Professor David Proverbs, Professor of Construction Management and expert in urban flood risk management said “This is a vitally important collaborative project looking towards the major challenges facing the city of Birmingham both today and in the future.

Birmingham is a fabulous city but needs to rise to the emerging challenges of low carbon, energy, transport and health and inequality which are evident in the city. We need to develop a blue-green infrastructure and to address the disconnect between citizens, the urban form and the environment.
Professor David Proverbs

“As the University for Birmingham, we are delighted to be playing a key part in helping to enrich the quality of life for people living, working and playing in the city. The findings from our studies will also provide important lessons for other world cities around the globe thereby helping to extend the reach and impact of the findings for the benefit of a diverse range of communities.”