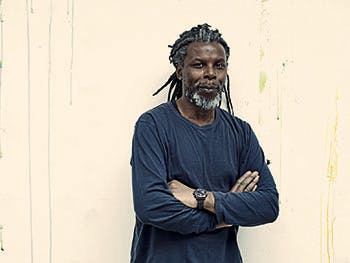 One of Britain’s leading contemporary painters is to receive an Honorary Doctorate from Birmingham City University – over 30 years after studying at the institution.

Birmingham-born artist Hurvin Anderson, whose works are largely inspired by growing up in the city’s African-Caribbean community, studied a Foundation in Art and Design at Birmingham City University back in 1991 when it was known as Birmingham Polytechnic.

He has since gone on to achieve international status in the art world with works exhibited in prestigious galleries such as Ikon Gallery in Birmingham, Arts Club of Chicago, and Tate Modern in London.

Anderson, who now lives and works between London and Cambridgeshire, will return to Birmingham on Wednesday 10 August to receive one of Birmingham City University’s highest accolades in recognition of his outstanding achievements as an artist.

I am privileged to be awarded this Honorary Doctorate by Birmingham City University.  So much of my early work was conceived in the city and influenced by my experiences here. My family and my youth in Handsworth are still the essence of that work and who I am.  It is an honour to receive this recognition for my successes but also a reminder of where I made those first steps in painting at Birmingham Polytechnic early in my career

“Hurvin Anderson is a huge inspiration to many of our students at Birmingham School of Art. His success and significant contributions to contemporary art worldwide serve as a reminder of the wealth of potential we have in our city and what we can achieve when we nurture our home-grown talent. We hold all our alumni dear and are incredibly proud of what Hurvin has achieved.”

In 2017, at the age of 52, Anderson became one of the first artists over 50 to be nominated for the prestigious Turner Prize for his exhibitions at New Art Exchange, Nottingham and the Art Gallery of Ontario, Toronto. The judges described him as "an outstanding British painter whose art speaks to our current political moment with questions about identity and belonging".

The following year, in 2018, Anderson also became the first artist to be selected for the TenTen Commission – created to showcase the work of some of the best British artists across the UK’s network of embassies and diplomatic residences across the world. Anderson’s contributions to the TenTen scheme feature scenes of memories from the front room of his mother’s house in Birmingham.

Born in 1965 to parents of Jamaican descent, Hurvin Anderson’s paintings often explore spaces occupied by Caribbean immigrants, such as public parks, gardens, barbershops and domestic interiors, which function as sites for both social gathering and economic enterprise. Anderson also studied at the Wimbledon School of Art followed by the Royal College of Art.

Anderson is currently participating in the Manchester staging of British Art Show 9, in the Radical Landscapes exhibition at Tate Liverpool and in the Kingston Biennial, Jamaica.