The sound of war comes to School of Art 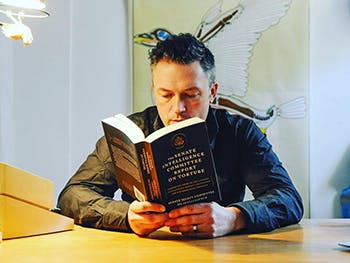 Artist in residence Justin Wiggan has brought the sounds of war to the Birmingham School of Art.

Hidden Entries is a series of sound compositions based on the Great War from 1914 to 1918, translated into five QR tiles inlayed with gold leaf and cut into Indian Red Stone by local tile mason Paul Houldey. These are placed around each floor of the School of Art in ascending order relating to every year of the War, allowing people to scan the tiles and then listen to each recording.

The project took a total of two years to put together, from October 2014 to March 2016. Justin wanted to find out what effects the war had on being a student and what the curriculum was at the School of Art, having been a student there himself in the 1990s.

He firstly spent six months looking through the Parkside archives and split each section of war-related research into sound pieces, which then became the tiles on the wall. He also visited Joseph Edward Southall's former studio – an ex-student who made anti-war cartoons – and recorded pieces there.

Justin's initial interest in his field began when he was a child, discovering he had failing eyesight and therefore had to rely on his hearing more. He experimented with cassette and radio players from about the age of six.

I remember on Sundays when the Top 10 played, I used to record the radio whilst my mother was doing housework. When listening back, I could hear the vacuum cleaner over the top, creating noise and melody which is similar to my work now.

The inspiration behind the project came from a Greek writer, Antiphanes, who wrote about words freezing solid in winter. In spring these words would thaw and people would hear them.

Justin added: "I liked the idea of sound being accessed in different ways." Another source of inspiration was archaeoacoustics (the study of sonic nature in parts of archaeology), in which solid matter can soak up sound and keep it trapped until it escapes slowly.

Justin admits that it was difficult to listen back to all of the recordings, as they are synchronised with brainwave frequencies to stimulate the emotional impact of the war for the listener. This includes a composition of sounds such as gunshots, window cleaning and repairing watches.

"The thing about sound is because you can't see it it's quite romantic, and it can do some strange emotional things to you," he said.

More about Justin's research and recordings