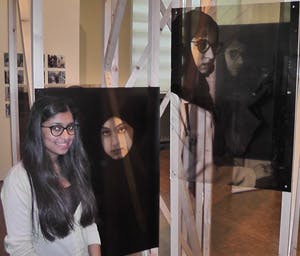 On entering Birmingham City University’s end-of-year Art and Design show at the Birmingham Museum and Arts Gallery (11-16 June), you’d be forgiven for thinking there’s a problem with the plumbing.

Visitors’ reactions range somewhere between bemused and worried for their hairstyles, while they attempt to locate the source of a loud cascade of echoing drips, emanating from a spot eerily close to the building’s toilets.

Art and Design student Susan King quickly reassures that her sound installation has a very different purpose: “My work aims to make people think about how they perceive art, and consider what they’re hearing or seeing,” she explains.

“I’m interested in helping children with learning difficulties overcome barriers to communication, in this case through sound. That said, we have thrown some people who’re concerned there’s an issue with the drains!”

Student Davina Pogson is similarly interested in everyday ideas taken to another level. Her acrylic dress with metallic thread aims to generate debate around a point where women’s fashion becomes impractical.

Davina says: “I’m interested in the concept of what’s wearable and functional, and taking that to a place which isn’t natural or practical.”

Continuing a theme of restrictive codes of behaviour, Amani Alsaad focuses on the role of the hijab in women’s lives and its effect in different countries across the Middle East.

“I’ve used black and white photography set on a clear acetate background because I wanted to make a point about the hijab and transparency,” she says.

Altogether this is a fascinating and challenging exhibition of art and design from Birmingham City University, representing a culmination of student work which hasn’t appeared in such a prominent public venue for over 50 years.

Sean O’Keeffe, Course Director for Art and Design at Birmingham City University, adds: “A new partnership between our own Birmingham Institute of Art and Design, and the fantastic team at Birmingham Museum and Art Gallery, makes this an amazing opportunity for our students, who continue to surprise audiences with their ingenuity.”