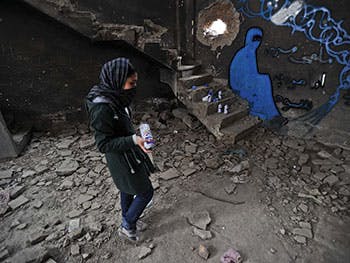 Migration from Asia and the Middle East to Western Europe could provide the kind of vibrant boost to arts and culture as movement from India and Pakistan did to UK food tastes over the past 40 years, a leading artist and academic has said.

Professor Bashir Makhoul, practising artist and Deputy Vice-Chancellor at Birmingham City University, believes the movement of refugees from countries such as Afghanistan and Syria to Europe could provide a spark of creativity, pushing boundaries and leading people to explore art and culture in new ways.

Professor Makhoul is the co-editor of a new book, ‘Conflict and Compassion’, which highlights how economic arguments overlook the cultural benefits of closer links between Western Europe and conflicted countries – which the book describes as a “Third Space”.

Professor Makhoul said the conflict he experienced growing up in Palestine had a profound impact on his own creativity and that the migration of refugees provided a unique opportunity to change the face of European art and culture forever.

“Migration, both under the tragic circumstances we are seeing right now and in less challenging situations, has the capacity to diversify a region for the better because artists’ responses to adversity are often those which leave the strongest message.

The movement of people from countries like Afghanistan and Syria into Europe is often viewed in economic terms but there are often long lasting and far reaching benefits. Just look at the impact post-war Asian migration has had on the UK’s food scene – it’s been transformative.

“While we automatically – and understandably – think of the destruction that comes as a result of conflict, it can also be the source of a need to express, create and innovate.

“The art and culture which is born out of difficult and challenging situations such as forced migration – actually, expulsion – not only begins to push boundaries but also serve as historical documents which encapsulate and portray an era forever.”

‘Conflict and Compassion’ launches today (May 23) at HOME, Manchester’s centre for international contemporary art, theatre and film. The book features a series of contemporary artworks from across Asia and analysis of the influence of conflict on artists’ work.

It looks at the impact migration has had on art and culture historically as well as the influence it may have in the coming years, in light of the current global situation.