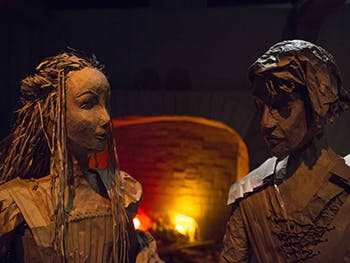 A life-size installation featuring more than a dozen of Shakespeare’s most famous creations handcrafted from paper and cardboard, is causing much ado about something.

The show at Birmingham City University which displays scale models over six feet tall, a three-meter-high balcony and even a walk-in tavern, has been made as a tribute to mark 400 years since the Bard’s death.

Each piece in the installation was individually crafted by 22 first year students from the University’s Design for Theatre, Performance and Events degree course.

They used techniques learned on the course to sculpt 780 meters of corrugated cardboard and nearly 5,000 meters of brown paper into the entire setting and characters.

Among the figures on show are a likeness of William Shakespeare writing at his desk and full size replicas of some of theatre’s most famous names - including King Lear, Caliban, Richard III, Romeo and Juliet.

The exhibition took nearly three weeks to create, with students working day and night to make each setting, character and item from scratch, as well as selecting music and lighting to complement each element.

The installation housed in the Shell space at the University’s Parkside building is open to the public until Friday February 26, meaning visitors can attend as they like it.

Hollie Wright, Module Leader for the project, said: "The project is a simple yet extremely effective approach to experiential learning."

We want the first year students to engage with fundamental principles associated with performance design including scale, narrative, space, light, sound, audience and collaboration; as well as abilities that are difficult to teach like tenacity and determination.
Hollie Wright

“The project begins with students researching and responding individually to a given theme, which this year was Shakespeare, ideas are pitched and a final one is chosen to realise to full scale out of these basic materials.

“We have full confidence in the students’ research, skills and abilities to reach this to the high level presented, so that the ownership of the project is entirely student led.”

The Shakespeare Birthplace Trust helped students research the project and visited the installation to select a number of characters and settings which will be taken away and displayed across Stratford-upon-Avon when the project ends.

The tavern in the installation is intended to replicate London’s historic Gorge Inn, where history’s most famous playwright is believed to have penned many of his works.

Traditional Elizabethan music plays throughout the exhibition hall alongside words taken from Two Noble Kinsmen – Shakespeare’s final play– as a poignant tribute to his lasting legacy.

“It’s very rare that you get an art installation that really looks at the times that Shakespeare was writing in as well as looking at new interpretations of his own work, so it's really an unusual and creative concept to bring those two together into one installation."

“We're delighted with this collaboration and we're really excited, that in this important year, we've got something we can show our guests from all over the world."