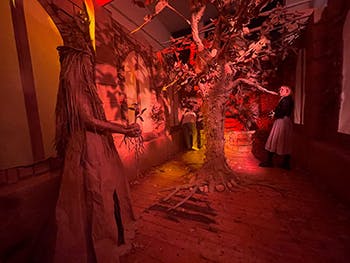 Students at Birmingham City University have marked the first year of their Design for Performance: Theatre, Film and Live Events degree by transforming a room at the city’s historic School of Art into an otherworldly immersive installation – made exclusively out of paper and cardboard.

The Flora and Fauna themed walk-in work, created by thirteen DfP students over 3,000 hours using 2,500 metres of brown recycled paper, has seen the basement space in the 179-year-old Grade I listed building take on an ethereal new life as ‘nature’s sanctuary'.

Drawing influence from temples, forests, indigenous and pagan traditions and cultures, the intimate and calming 25 square metre installation features over 3,000 individually produced leaves made from paper and is watched over by a delicate and intricate Mother Nature figure, as well as a majestic Green Man.

Students Jem Thorp and Louis Radley were amongst the student group admiring the fruits of their labour.

Louis said: We all started off designing our own individual concepts, then merged those designs into one cohesive narrative that we could use for the actual project which was cool. I proposed The Green Man to the group, and we took it forward. The small leaves around his head took at least a couple of hundred hours. It's really satisfying seeing the end of it. Once it's all up there, it's all worth it.

I've definitely become a lot more comfortable using paper as a medium as a result of the module. Plus, it's good to see you don't have to spend a lot of money to make really nice pieces too. We've spent a lot of this year looking at projection mapping and design so to get hands on, down and dirty, helps us to not forget where design has come from.

The students, whose course prepares them for careers in the worlds of live music and theatre production, used paper and card to create the collective work, for what has become a traditionally challenging but hugely rewarding first-year module for the degree course.

Hollie Wright, Lecturer in Design for Performance Theatre, Film & Live Events, said: “We want first-year students to engage with fundamental principles associated with performance design including scale, narrative, space, audience and collaboration; as well as abilities that are difficult to teach like tenacity and determination.

I'm immensely proud of what this group have achieved in such a short amount of time. The early realisation of the time it takes to carefully produce a single paper leaf was key as so many were required to dress the space. A great celebratory end to their first year.

The Design for Performance: Theatre, Film and Live Events degree course at Birmingham City University has evolved over the past 70 years and embraces the many design and production opportunities available within the entertainment industry.

Previous works have marked 400 years since William Shakespeare’s death, celebrated the Great British Music Festival in the year of Glastonbury’s 50th, and documented insects from across the globe.

The 2022 Design for Performance: Theatre, Film and Live Events paper installation will be open to the public in room B01 at the Birmingham School of Art, Margaret Street from 1000 to 1700 on Thursday 16 and Friday 17 June as part of Birmingham City University’s Inspired Degree Festival.