Chinese art to become a focus of art expo 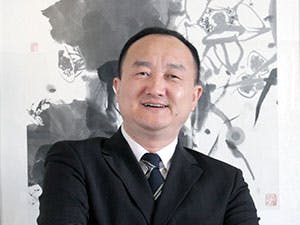 Chinese contemporary art may be in its infancy but it is already a hotbed of creativity and could soon overtake its equivalents in Western countries, according to the artist behind a major new exhibition at Birmingham City University this month.

Ren Wendong, whose work The Force of the Lotus is launched to the public on 22 September, argues that the impact of China’s continuing economic growth on the country’s society is creating a breeding ground for ambitious, risk-taking contemporary art.

Highlighting the record 64.3 billion yuan [$10.4bn] Chinese art auction market last year, Ren said: “The vast funding available for arts in China at the moment, combined with the creative ambition of artists inspired by big changes in society – through economic development and political reforms – is turning the country into a hotbed of young artistic talent.

“China is an ideal setting in which to build a secure creative future, for art experimentation and for innovation across art forms. It has helped a number of Chinese artists to find a global audience for their art in recent years, motivated by an interest in re-interpreting traditional art forms.”

Ren is a renowned artist and creator of large scale public artworks in China, responsible for designing both the Olympic Square and the distinctive Xing Hai Square in the major southern city of Dalian.

His exhibition of ink paintings draws on a range of artistic forms – including representational and abstract drawings, as well as poetry – to examine the lotus flower and its significance to Chinese culture and society.

According to Professor Bashir Makhoul, Pro-Vice-Chancellor Birmingham City University and curator of the exhibition: “Ren Wendong’s work draws on the origins of ink in China 5,000 years ago, the constant emergence of beauty from filth and the dynamism of Chinese culture in a soaring 21 century economy.

“Ren’s paintings simultaneously depend upon and must transcend the stuff from which they have emerged.

“In Chinese traditional culture, lotus flowers represent an ultra-mundane spirit of growing in mud without being contaminated. They bring to humans feelings that make us want to rise up. Therefore, the symbol of the lotus flower encompasses the philosophy of power, energy and upward movement.”

Ren Wendong’s exhibition at Birmingham City University is open to the public from 22- 26 September.