‘Forward Together’ is a reimagining of Birmingham’s crest being raised by a line of 25 figures, which was designed by Luke, and made by a team of his friends, many of whom had never worked in a factory or with metal before, including BCU Senior Development Manager Raaj Shamji.

Luke said that the beauty of the Midlands is its diversity which makes it interesting, attractive and exciting: “Creating public art work has made me realise how little representation there is of non-white groups and working class figures. In public art, there is a huge amount of class, racial and gender divide. It tends to just all be white men. It has always been my ambition to tackle this.”

“For ‘Forward Together’, my brief was to represent my region. The beauty of the Midlands is its diversity; that’s what makes it interesting, attractive and exciting. You can see it when you go to other places, which are more monocultural; that lack of diversity is more of a limitation than a virtue.” 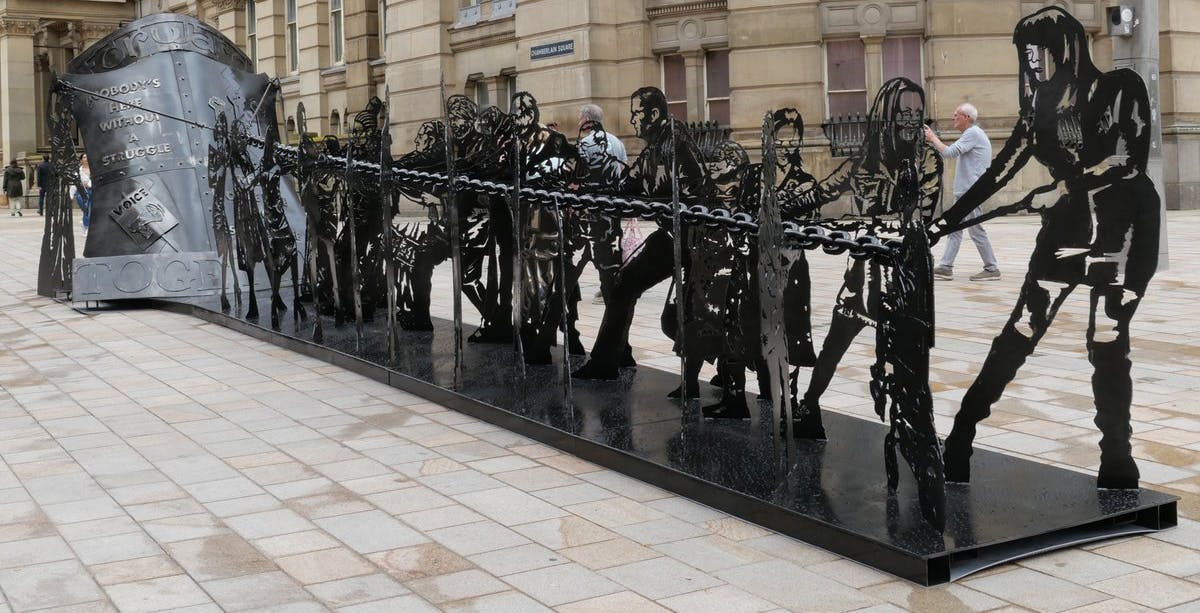 The 13-metre long installation was built over 14 days by Luke’s team, who were trained at his Cradley Heath factory where it was made. The monument brings together a collection of local people as the steel silhouettes who the team regard as extraordinary, yet everyday people. Luke and Raaj specifically chose people who are “excellent representatives of their communities”, choosing to work with many faiths, disabilities, genders and all walks of life.

Luke said: “As people, we are struggling. We’ve got identity politics, and people are encouraged to be divided. My idea is that we all need to be doing something together, and I needed a symbol of that. The Birmingham crest has inspired me over the years. It features workers and the word ‘forward’. For me, that felt really positive.

“The shield itself is split into sections. One part features quotes from Birmingham writer Benjamin Zephaniah’s poem ‘We Refugees’, with the lines ‘We all came here from somewhere’ and ‘No one is here without a struggle’. Another section features three fists, which symbolise change, and a megaphone to symbolise Victoria Square as the home to many marches and political activism. Then, there are the 25 people. The shield can be interpreted as it is falling down, or that they are bringing it upwards. The idea is that without the people pulling it, it will collapse.” 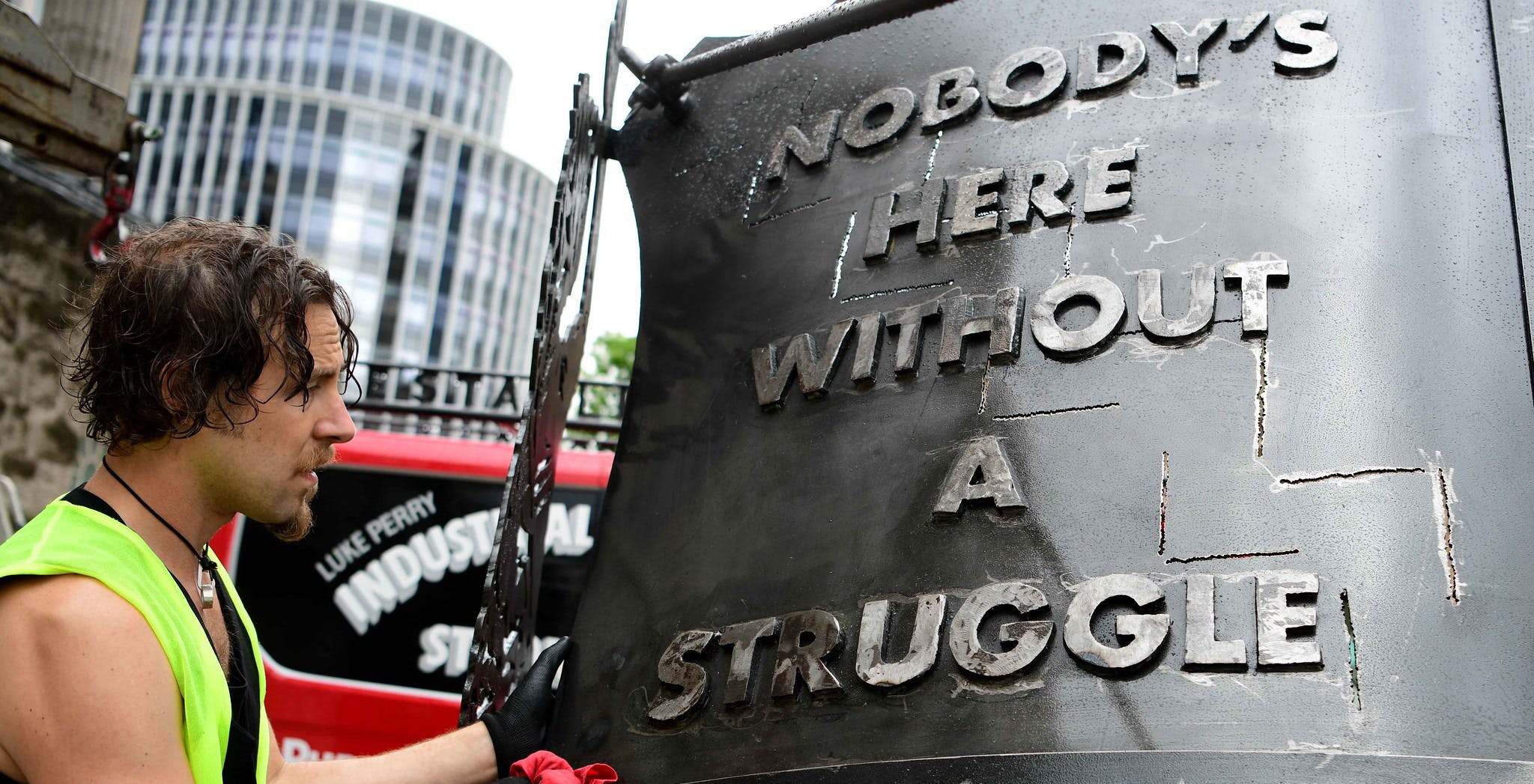 Luke has been creating public art for over 15 years, aiming to represent those who are underrepresented: “A lot of my work involves talking to people and finding out what is really important to them and their area, and what needs to be addressed. Public art helps to mark history before it’s forgotten, so it’s incredibly important to communities.

“Some of the pieces I am most proud of include the Lady Chain Makers Monument in Cradley Heath, which symbolises the conditions endured by women chainmakers and their demands for a minimum wage, which caused a national scandal and a strike in 1910, and the ‘Warrior Queen’ Lady Aethelflaed in Tamworth, which has now started a nationwide love of the town’s key figure and her role in English history.” 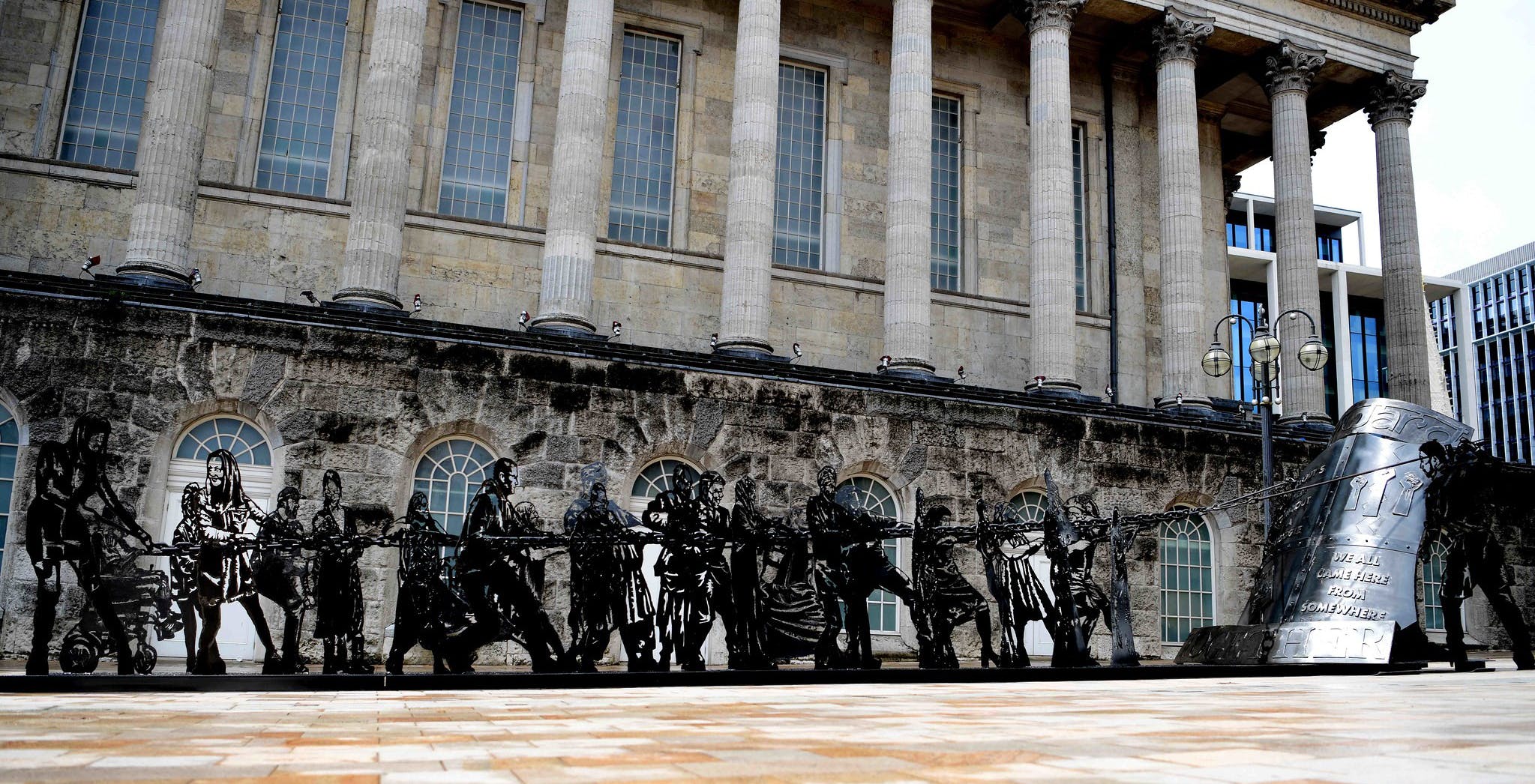 Luke’s family has a long history of chainmaking and working with heavy metal, and despite many trips to A&E, he continues to make all of his own work. He said: “I make all of the work myself and with my own hands, because I love doing it.

"My advice to current Art students would be that if you don’t love doing something, then stop doing it. Think about what you’re doing it all for and if it’s not worth doing, change it. It’s never too late to change anything.”

Find out more about our BA (Hons) Fine Art course

Uncovering the secrets of Birmingham’s past

Why you should study art in Birmingham

Which School of Art course is right for you?