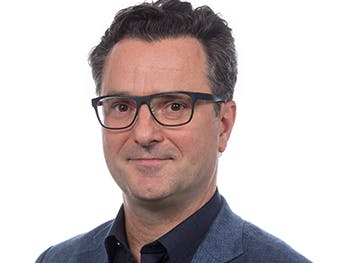 A senior Birmingham academic has a busy month ahead, as he has been invited by two major art institutions to interview two of the world’s most renowned artists – China’s Ai Weiwei and John Akomfrah MBE.

Professor Anthony Downey from Birmingham City University will first be in conversation with the award winning film-maker John Akomfrah on Thursday 12 October at the Barbican Centre, London.

The conversation coincides with the screening of Akomfrah’s most ambitious film to date, ‘Purple’ (2017) which premiered last week at the Barbican. ‘Purple’ is an immersive six-channel video installation that examines global environmental change and degradation through archival footage and newly shot film.

From the hinterlands of Alaska to desolate, icy Arctic Greenland and the volcanic Maquesas Islands in the South Pacific, Akomfrah’s new film prompts the viewer to meditate on the complex relationship between humans and the planet.

Over the last three decades, the work of John Akomfrah has consistently rearticulated how the medium of film can effectively explore the immaterial nature of memory, place and identity.
Professor Anthony Downey

Meanwhile, on Wednesday 25 October, Professor Downey will interview Chinese visual artist and political activist Ai Weiwei in Antwerp. The interview will coincide with Ai Weiwei’s first solo show in Belgium, which will take place at the Fotomuseum Provincie Antwerp (FOMU). The exhibition will showcase the Chinese artist’s seminal political statements such as ‘Study of Perspective’ (1995-2011) and his daily stream of selfies and snapshots on social media.

A leading exponent of contemporary art, Ai Weiwei’s work has increasingly become identified with a political turn in visual culture and his work continues to realign the boundaries of what art as a practice can achieve.

Commenting on the artist’s practice, Downey observes how “the critical and institutional momentum surrounding Ai Weiwei’s work, including its circulation and distribution across print and digital media, offers a crucial entry point into how we reconsider the politics of contemporary visual culture today.”

Anthony Downey was appointed to the post of Professor of Visual Culture in North Africa and the Middle East in 2016. The first position of its kind in the UK, Professor Downey is currently establishing a research centre and a postgraduate programme in partnership with organisations across the Middle East and North Africa (MENA) region.

As an academic, editor and writer of 20 years, Professor Downey is the founding editor and editor-in-chief of ‘Ibraaz’, a leading online research platform for critical analysis of visual culture in the Middle East, and an editor at ‘Third Text’, the leading international journal dedicated to the critical analysis of contemporary art in the global field.

Downey’s recent publications include ‘Don’t Shrink Me to the Size of a Bullet: The Works of Hiwa K’ (Walther König Books, 2017), ‘Future Imperfect: Contemporary Art Practices and Cultural Institutions in the Middle East’ (Sternberg Press, 2016) and ‘Art and Politics Now’ (Thames and Hudson, 2014).

The interviews with John Akomfrah and Ai Weiwei will form part of his next book, ‘Zones of Indistinction: Contemporary Art and the Cultural Logic of Late Capitalism’ (Sternberg Press, forthcoming, 2018).

Professor Downey is based in Birmingham School of Art, part of Birmingham City University. Purpose-built for the study of art in 1885, the historic School is located in the city centre’s museum and gallery quarter.

Courses currently on offer at the School of Art will be showcased at Birmingham City University’s Open Day on Saturday October 14.