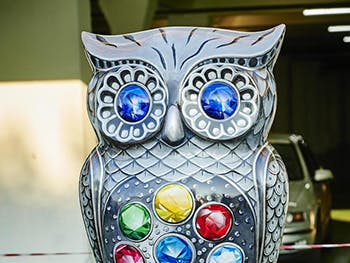 A Birmingham City University graduate has helped lend her design talents to one of the eye-catching owl statues which have recently been installed in Birmingham.

Sue Guthrie, who is an alumna of the MA Fine Art course, designed the University-sponsored 'Jewellery Owl' which is currently on display at Golden Square in the Jewellery Quarter. Sue specialises in both painting and digital media and has previously worked for BMW, John Lewis and the NHS.

The statue is part of The Big Hoot, a city-wide project run by public art specialists Wild in Art in partnership with Birmingham Children's Hospital which has seen over 80 different owl statues installed in locations across Birmingham.

The artist notes on the sculpture reads: "This opulent owl is inspired by the city's famous Jewellery Quarter and references its rich history. It is designed to appear as though it is made of silver in a Trompe-l’œil style, Jewellery Owl creates an optical illusion and the dazzling, cut gems stand out and appear real."

The Big Hoot features work by artists of all disciplines including illustrators, graffiti artists, printmakers and graphic designers. Many of the themes for the statues are rooted in the history and heritage of the city, including designs inspired by Cadbury, Ozzy Osbourne, the Selfridge Building and even the universities of Birmingham.

The project has also been supported by some of Birmingham's most influential businesses. The owl statues will remain on display until the end of September.

Find out more
about our MA in Fine Art