Project brings the whole School together 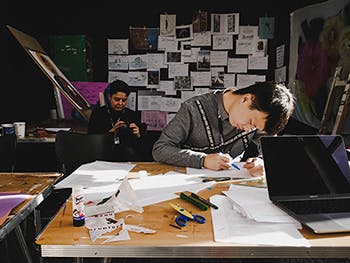 Recently we cleared our schedules as the entire Birmingham School of Art worked together on a two-day long project with the prospect of working with Tate Liverpool. The All School project brought together students from across our Undergraduate and Postgraduate courses to work in a multidisciplinary manner.

The aim of the activity was to form ideas, visual representations and activities that can be taken forward by the School in its partnership activity with Tate Liverpool, which culminates in a Co-Created Exhibition Project at Tate Liverpool in Spring 2020. This offers students and staff the opportunity to work with Tate curators, educators and art handlers in a unique experiment in co-designing a major work in one of the premier exhibition spaces in the United Kingdom.

The project brief was a whimsical-yet-serious research activity centred on the theme of ‘The Shipping Forecast’. Ships – real and fictional – can be thought of as microcosms of human society of one scale or another, with their occupants representing the society from which they have sailed, or to which they are sailing. ‘The Shipping Forecast’ is a project where we consider ships as metaphors for the past, present and future of societies and their passengers. Birmingham School of Art and its ‘passengers’ – students and staff – may be on a journey of its own, and part of British and global society, a passenger on the trip the whole world is now on.

At the beginning of the two days, the groups were introduced to a list of ships they could choose to start their ‘imaginative journey’. The work started quickly, with research on the context of their choice, including researching the historical, social, emotional, artistic elements. Through the exploration of the theme, students and staff were prompted to think creatively and critically about human pasts, presents and future.

The groups were asked to develop key themes and work out the best way of conveying their proposals, including performance elements. The students were encouraged to think of their ideas/representations in the presentation as ways to imagine critically and creatively our shared future. These were embodied by the ships’ journeys that the groups examined: futures for them, for Birmingham School of Art, and the country.

The All School Project enabled the students and staff of Birmingham School of Art to congregate as a single community, in order to consider the future of art, of the School, Britain and the world as it faces perhaps the most dangerous challenges since the Second World War. The insights and ideas developed during the All School Project will be taken forward in an exciting research-driven exhibition at Tate Liverpool to happen in Spring 2020.

At the end of the two days, students were asked to put together manifestos from their findings. The manifestos included everything from films, presentations, banners of expression, and artworks that look at society and civil rights today.

The project was designed to help build a collective and supportive identity within the School and help form ideas that could be taken forward in a Co-Created Exhibition Project as part of our exciting partnership with Tate Liverpool. Keep an eye out in the future as the School takes this project forward together for Spring 2020.