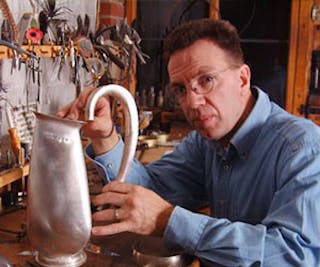 During a 30-year-plus career, Reading-born Rod Kelly has been commissioned to design work for royalty and 10 Downing Street – and his pieces can be found in museums, abbeys, cathedrals and colleges across Britain, as well as being used as prizes at sporting events like Ascot.

After completing a Foundation Course in Art at Lancashire Polytechnic he came to Birmingham to study for his degree in 3D Design. After graduating, he progressed to the Royal College of Art in London to complete his Master's and stayed there for a further three years, setting up his own studio in the capital.

I enjoy working to commission. I have often been told by clients how the process of commissioning a piece of silver has been so enjoyable and rewarding. Discussing a brief with a customer, understanding their interests, discussing the function and shape and then meeting to look at the first sketches is very exciting."

His commissions have included a rose bowl presented to Her Majesty Queen Elizabeth the Queen Mother on the opening of the Pirelli Garden at the Victoria and Albert Museum, a first class stamp to celebrate the Millennium, a new £2 coin celebrating the life of Brunel and a Queen Elizabeth I £5 crown – both for the Royal Mint. He also designed a silver mace for the University in 1995. He was recently commissioned by The Royal Warrant Holders to make a silver and gold goblet for The Royal Wedding.

He has received a host of awards and accolades, including being granted Freedom of the City of London and being made a Liveryman of The Goldsmiths’ Company and winning a D&AD Silver Award for the Most Outstanding Illustration and Graphic design for his Royal Mail stamp. He has been a Trustee of The Bishopsland Trust for the last 18 years, the Trust helps young silversmiths for one year after leaving University with a workshop and further technical training. He is also a Fellow of Birmingham City University.

Since 1986, Rod has lived in Norfolk where he shares a workshop with his wife Sheila McDonald, herself an enameller and jeweller.