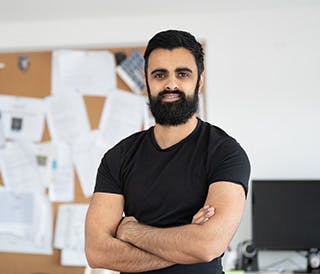 Since graduating from Birmingham City University’s BA (Hons) Product and Furniture Design course, Hans has gone on to work as a Senior Industrial Product Designer at London company LUMA-iD, who specialise in designing and manufacturing consumer electronic products and medical devices such as ‘ArcX’, a smart ring for use in sport and fitness.

He has been recognised by industry leaders as Dezeen's Emerging Designer of the Year, and was included in Time Magazine's Young Leaders in their Field and SZ Magazine's Top 10 Designers Under 30 in the World lists.

Hans has collaborated with household names such as Google, Facebook and McLaren, but has most enjoyed bringing his own products to market, including ‘Drop’, a water bottle made from bioplastic that takes just one month to biodegrade.

Hans has made headlines around the world for his product ‘CATCH’, a low-cost, self-testing HIV detection device. The simple, economical design allows people in developing countries with limited access to medical support to check themselves for HIV at home. By increasing the likelihood of early diagnosis through testing, CATCH could save millions of lives a year.

In 2016, Hans’ London Tube Collection, a range of furniture items that celebrate London culture and the Underground, was showcased at London Design Festival. His work has also been exhibited in New York’s Museum of Modern Art, and is soon to be featured in the Smithsonian Museum in New York.

Reflecting on his time at BCU, Hans commented:

“There is one definitive factor in particular that sets the Product and Furniture course apart from the others: the lecturers aren't afraid to push you to your limits. Many of my peers whom I studied with developed such thick skins due to being tutored at BCU. If an idea is bad, the lecturers will tell you immediately rather than leading you aimlessly on the wrong path. This clinical approach gave me a huge advantage over other graduates entering the industry."

“I could talk for hours about the social aspect of living in Birmingham, but in terms of studying, it really is fantastic. The facilities are constantly being improved, the staff are forward thinking, and alumni are always eager to come back as visiting lecturers. Not only does BCU teach the tangible skills required to succeed in the industry, they also set you up psychologically to ensure you have a leg up on the competition.”