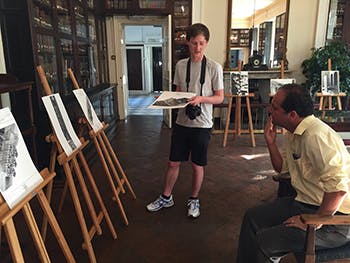 MArch Architecture student John Fisher recently fought off stiff competition from students across the Faculty of Arts, Design and Media to win the Louisa Anne Ryland travel scholarship. The scholarship gives the winning student an opportunity to go overseas to learn more about a project from their subject area.

Read more about the course

John was nominated from the course for his work on the Gibraltar project ‘Scar_City’. As part of the process John had to submit a proposal, before presenting to a group of representatives from Schools such as the School of Jewellery, and the School of Fashion and Textiles.

Although it was an individual nomination, I decided to take a different tack of presenting as a group trip. I made it clear to the judges it wasn’t just an individual prize – I wanted to share it with others who had worked on the project.

As part of the MArch Architecture course, students were given briefs on different European countries - groups travelled to cities such as Paris, Italy or Venice. For Gibraltar, the students were briefed to specifically look at how Gibraltar would look post-Brexit, despite the majority of the population voting to remain in the EU. The ‘Scar_City’ group tasked with this brief included John, Mary Cooke-Fox, Navdeep Biku, Dhanesh Lakha and Alex O’Connor.

The students completed desktop research before live research in their initial visit. John and the other students looked at various theories and applied them to Gibraltar, developing their thesis project from there. Each student then picked up a strand in different directions to complete individually. Everyone was keen to go back to showcase how far the work had progressed and the scholarship gave them the perfect opportunity.

Before arriving in Gibraltar for a second time, the students got in contact with a few of the people they’d met the first time around. This included Dr Jennifer Ballantine Perera, the Head of Gibraltar and Mediterranean Studies at the University of Gibraltar who also works at the Garrison Library.

“We reconnected with her over email and asked if we could set up an exhibition in the library and thankfully she agreed. Whilst we were there she got in contact with the Gibraltar Chronicle, who interviewed us about our projects and exhibiting. Being mentioned on the front page was pretty surreal!”

Having the chance to exhibit in the library was certainly one of the highlights. We also managed to get the opportunity to be published in an up-coming journal, alongside being featured in the paper. We managed to achieve everything we set out to do, which was beyond expectation.

The students set up a blog to look back on their time in Gibraltar, which you can see here.