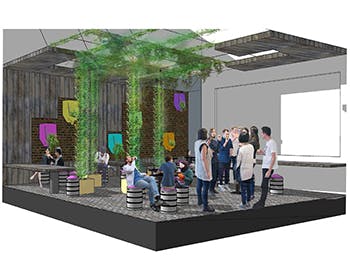 Students across all years of BA (Hons) Landscape Architecture recently had the opportunity to work on a live project with Willmott Dixon to re-design the courtyard around the Eagle & Ball pub, home of our Student Union.

As part of the regeneration of the area, the Eagle & Ball has been fully refurbished in tandem with the construction of the City Centre campus for Birmingham City University. The architects designed the interior to reflect its former days whilst providing a modern and appealing look and feel to students, University staff and the general public.

Students were brought into look at the redevelopment of the area, specifically the courtyard. The brief asked students to consider the local development, including more seating and food covers. The design needed to showcase how the courtyard could be used year round, and how it could provide a temporary bar solution.

The students were designated into groups, where they spent time researching the Eagle & Ball and the surrounding courtyard.  All of the groups all presented their ideas to John Moore, Commercial Services Manager at Birmingham City University Students’ Union. Speaking afterwards, John said:

The winning design was by far the best. The concept was explained really well and the plans accompanying it were thorough and informative. The others were good but this was a stand-out presentation.

The winning group of students included Sona Maresova, Karishma Ladva, Ross Redman-Schaffer and Ally Harrison-Dean. The vision for their work aims to add to the charm and character of days past, balanced with a modern feel.

In the comprehensive submission, the winning group considered a wide range of elements in answer to the brief. In response to the access requirements, movable tables were included. Dual purpose areas were included that could be used for either an eating area or temporary bar when needed. A wire structure connects the base to the overhead shelter, allowing the courtyard to be used all year round.

Wall hanging plants were chosen to give colour and texture throughout the season, using the wire structure to bring the area to life. Students also considered the table planted pots, and a space for herbs as requested in the brief.

The prize winning students will be meeting with Associated Architects in August to discuss their plans with a view to helping turn them into reality. Watch this space!

As a student on BA (Hons) Landscape Architecture we’re keen to get you working on the same type of projects you would be when you graduate. Live briefs will give you tangible examples of working alongside clients and ensuring all of their requirements are met. These are key skills for your future career and give your CV that stand-out factor.