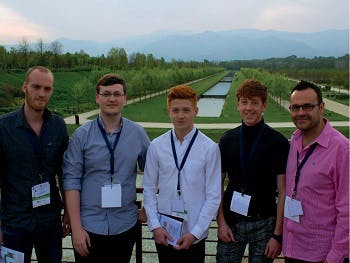 Birmingham School of Architecture and Design was the only institution to represent the UK by registering a student team at the International Federation of Landscape Architects (IFLA) Student Charette, part of the 53rd IFLA World Congress in Turin.

The event, held between the 16-19 April, has since been hailed as a reflection of Birmingham School of Architecture and Design’s ‘comradery’ by Niall Williams, a member of the team made up of five second year BA (Hons) Landscape Architecture students. Niall said:

The comradery of the whole thing was the highlight for me, as when we decided to change our concept on the evening of the last day we still managed to persevere and work as a team to produce a whole new project the next morning. We really enjoyed the trip and would definitely do it again and would recommend an experience like this to everyone.

Despite not knowing their exact position in the competition encompassing an intensive workshop open to graduate and undergraduate students studying landscape architecture from around the world, it is thought that the team came around fourth of fifth.

Many of the students on the three winning teams were at the end of their sixth year of studying landscape architecture, and two teams brought lecturers with them. Niall added:

“The other teams were all great and we had some great times in the evenings relaxing with some of them. We feel as though we came out stronger for this.

“Doing this well was reinforced by the challenges we faced from the other teams. So the odds were stacked against us especially with us only being second year students. It was very enjoyable, and we really had to rack our brains to come up with something innovative and that would stand out.”

The importance of togetherness and combined skillsets emerged as “massive” factors for the group.

“The teamwork factor was massive, without improving our teamwork skills and working together the whole project would never have been possible.”

The amount of work the team produced during the charrette was likely to rival that of at least two university modules, all done in three days. Therefore the importance of putting every minute to good use was “crucial”:

“Time management and structure of our designs was crucial as it gave us the ability to produce all of this to the standard we wanted. This has benefited our studies, our time management and thought process has been hugely improved, also the judges and lecturers were so critical of our work, it made us far more critical as well, which will really benefit our designs.”

To keep up to date with all of the latest news and information from Birmingham School of Architecture and Design, follow @BCU_BSoAD on Twitter and Instagram.