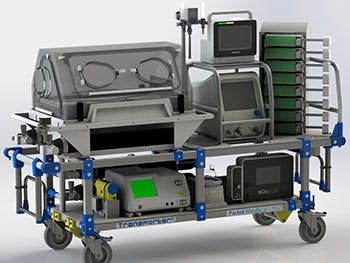 Academics and industry partners in Birmingham are developing a new device that will ensure newborn babies could survive in the event of a crash in an ambulance at up to 40 miles per hour.

Product design experts at Birmingham City University have teamed up with Evac+Chair International – makers of the world's most popular stairway evacuation chair – to develop the first-ever stretcher interface device (SID) for neonates.

The universal device for neonatal equipment will be securely attached to European Ambulance Loading Stretchers (EALS) and those in other markets worldwide, complementing the existing range of goods and services offered by Evac+Chair International.

With the newborn contained within an incubator, the partners are devising a quick attach/release mechanism that will see the device disengage from oxygen, power and other survival supplies in the event of a road traffic incident, to be then transferred quickly to another ambulance vehicle.

Through Birmingham-based Evac+Chair International’s ParAid brand, the company already produces an award-winning ambulance child restraint (ACR) – a flexible and fully adjustable harnessing system for the safe and effective transport of infants and children. What makes SID unique to previous designs is that it will isolate the baby from sudden accelerations and decelerations to reduce the stress of road transport.

To test the effectiveness of the design, SID will be impact tested at 40 miles per hour in a similar manner to how the European New Car Assessment Programme (Euro NCAP) verifies the fit and protection offered by child restraints in the event of a front or side crash.

More than 78,000 lives have been saved since Euro NCAP’s crash safety tests were launched in 1997, and the Birmingham team hope their SID and related products will achieve a safety rating similar to those given on child restraint systems.

The project has been made possible due to a knowledge transfer partnership (KTP) which has been agreed between Birmingham School of Architecture and Design, part of Birmingham City University, and Evac+Chair International. The terms of the programme will see a recent graduate from the University’s Product and Furniture Design course employed to work on the two-year project. Research findings from the collaboration will also be fed in to the University’s curriculum, ensuring that its teaching is informed by industry practice and innovation.

Dr Panch Suntharalingam from Birmingham City University is the lead academic on the partnership programme. He said:

“The major challenge in this project will be the development of a stretcher interface device with impact-resistant fixing points and ports for oxygen, power and other survival supplies situated around what encapsulates the newborn.

In order for the product to be desirable, it needs to be compatible with any European ambulance trolley, so this adds an additional complication, as the variation in emergency vehicles and their components differs across the continent.

“However, our work is vital in guaranteeing the safety of newborn patients in ambulances and giving their families piece of mind – something that will be at the forefront of all our minds throughout the project.”

There is a lack of research in recent ambulance accidents in Europe but in the USA, between 1992 and 2011, there was an average of 1,500 crashes involving an ambulance that resulted in an injury, with 2,600 incapacitated as a result. 29 per cent of the deaths caused in these incidents were ambulance passengers.

“Working with Birmingham City University will enable us to develop a world-class innovative safety conscious products to complement our existing range of specialist patient and casualty handling equipment.”

There are approximately 16,000 transfers of premature and sick babies each year in Britain, according to the UK Neonatal Transport Group. Many of these transfers are needed so that babies can be cared for in the correct type of neonatal unit.