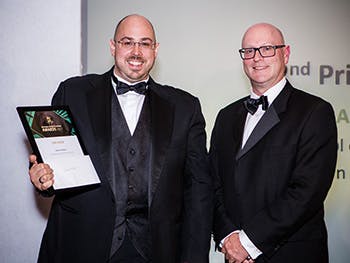 The 10th annual (APS) National Student Designer and Construction Design and Management Awards gathered to celebrate good practice in the construction health and safety sector. They are a benchmark of excellence, aimed at highlighting how good design and health and safety practices can help reduce deaths, injury and ill-health, both physical and mental.

The two students were invited to a House of Commons Reception in The Palace of Westminster, where they had the opportunity to meet their local MP and discuss their submission. The winners in each category were announced as part of The Awards Ceremony in The Gibson Hall.

Both proposals received praise from the judges, with Damion’s work on the Morecambe Town Hall commended for “considering the tight constraints of the site and addressed in design and methods and construction”. Aaron was praised for being one of the few submissions that considered demolition and recycling.

Speaking after the awards, Damion said:

“The proposal for the Morecambe Town Hall creates a typically open plan building that consists of a series of spaces radiating from a central core with a level of public, semi-public and private hierarchy to the layout. It looks to resemble the existing condition along the Esplanade with undulating glazed facades and over sailing timber canopies horizontally, as well as the diverse ‘roof-scape’ vertically.”

I was really pleasantly surprised to win the award. It was great to know that I had been awarded something at all as this was a national competition and I have never been involved in anything like this before.

“I was happy enough to make the short list regardless where I came in the end, but I have to admit that there was a moment after they had awarded the 3rd place when you think 'oh my god could I have won', and I then became really nervous.

“Regardless I am very happy with what I achieved as I did far better than I ever imagined, and the winning entry was well deserved, so in all an excellent experience.

Congratulations to both Damion and Aaron. For more information on our MArch Architecture courses, please visit the course page.