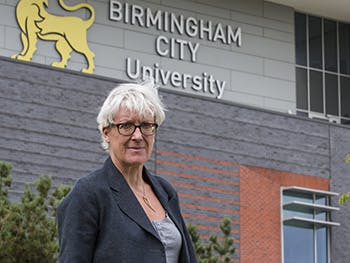 Landscape improvements and green city spaces are vital if the West Midlands is to unlock millions in potential investment made possible by projects like high speed rail, a leading architectural expert has said.

Professor Moore said steps to preserve and improve the West Midlands’ unique landscape, such as restoring the historic valleys which run through its heart and creating a raft of new public spaces in urban areas, would also make the most of major infrastructure projects like high speed rail.

Professor Moore has been working to help people see the region in a different light and throw off dated preconceptions about its cities.

She said HS2 would provide a unique opportunity to reinvent the West Midlands.

We need to have a different view of HS2 and see it not just as High Speed Rail but as a catalyst for social, physical and economic transformation within the region.
Professor Kathryn Moore

“The infrastructure that runs through parts of Birmingham, fractures the city, limiting access to educational and employment opportunities.

"The long term cost of actually making that situation worse must be taken into account in how we deliver HS2 in the region. We need to think of how high speed rail can actually improve things rather than make them worse.”

Professor Moore serves on the HS2 Independent Design Panel as well as being President of the International Federation of Landscape Architects.

She was speaking during an event called Design and the Midlands Engine – Big Midlands Meet, aimed at boosting the regional economy through design and architecture.

Professor Moore added that planning too often overlooked an area’s unique history and identity which was crucial to securing a city’s long term future.

She said: “We no longer recognise the pivotal role that landscape plays in shaping identity, culture, self-confidence and worth in everyday life.

“We need a strong, clear identity for the region and that includes replenishing the valley system. We need to be investing in the future so that people, their children and their grandchildren choose to stay here because of the high quality of life, employment and educational opportunities.