Green space good for people – and the economy 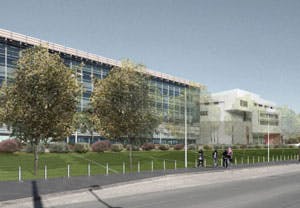 The newly-started park project in Birmingham is an excellent example of making the modern city work better says a landscape architecture expert from Birmingham City University.

“Recent research reveals that by increasing the high quality green space you can generate far reaching benefits to the local environment, the economy and wider society,” said Kevin Singh, Head of Birmingham School of Architecture at Birmingham City University.

“A good example is the new Eastside City Park and how it works with other neighbouring projects, such as the University’s adjacent City Centre Campus development which will feature a naturally bio-diverse environment on its roof.”

Birmingham’s good practice echoes comments made in a recent Guardian article examining the value of “green infrastructure”, which comprises of trees, green walls, green roofs, open spaces and the networks that emerge from linking these together.

In the way an attractive garden adds value to a residential home then green space has a similar role in supporting the urban environment.

Exciting projects such as Eastside City Park are providing inspiration on the doorstep for those studying on the BA Landscape Architecture degree at Birmingham Institute of Art and Design (BIAD), an internationally recognised centre of excellence based within Birmingham City University and soon to be re-housed in the new City Centre Campus at Eastside.

The design-based course covers a range of challenges from shaping the urban space, its interface with the rural fringe and beyond, to the protected countryside.
“Birmingham is a very exciting place for landscape design with some very interesting projects in recent years,” added Kevin.

The new £11m city park will feature formal lawns, public squares, water features and planted gardens. It will stretch from the city centre out into Eastside, and adjoins the current development site for Birmingham City University’s new City Centre Campus.

There are currently places available on the BA Landscape Architecture course. For more information, see www.bcu.ac.uk or call 0121 331 6777.