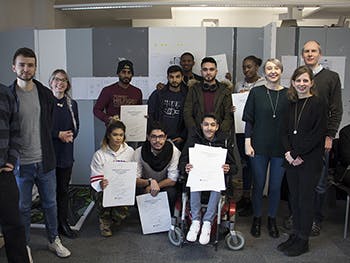 Second year BA (Hons) Architecture students recently took part in a live project to design a pop up restaurant on the University campus. Students were tasked with defining what kind food experience is currently missing from campus and propose a new alternative under the banner Food 4 Thought.

Working in groups, students were encouraged to consider what a restaurant is, and more importantly, what is could be. When choosing the location, students were asked to appreciate how people move on the campus and the visibility of their plan, from outside but also from inside University buildings. The structure had to be temporary, as it needed to be moved around campus and visit other locations.

Students created a set of drawings including maps, sketches, and diagrams explaining how the site and the context influenced their design decisions with an explanation on why they chose the location. A scale plan, section, elevation and model were also required and visuals of the pop-up showing internal space with materials and light considered.

Run as it would in industry, students demonstrated their evidence of design process explorations and formulate a design brief in an unfamiliar context. There were a number of prizes awarded for the student work, including peer review with First Year students, academics and current MArch Architecture students. Prizes ranged from Best Model, to Best Construction, and Students’ Choice.

Winners of the Grand Prix prize was Muneeb Ahmad, Sohail Dad and Omar Mahmood for their project based around a new Chinese pop-up restaurant. Speaking afterwards, Muneeb said:

Our design was inspired by Sohail being born in China. We decided to use that and after completing more research on Chinese food and architecture, the structures were beautiful and we were inspired by the material used. In terms of development, this project has helped me use technology less, I was able to practice on my hand drawn sketches and improve on them.

The judges comments praised the team, who also won the Students’ Choice prize:

“The winning proposal blurs the boundaries between architecture and landscape design and explores eating as a spatial and social experience, introducing an element of discovery and relaxation to a busy university campus. A captivating and comprehensive graphic presentation with a strong visual identity reflective of the project’s spatial qualities and narrative.”

Congratulations to all students involved.