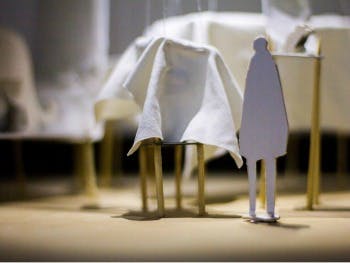 Architecture students have had the chance to learn about the process of curation and exhibition design by collaborating with the curators of Birmingham Museum and Art Gallery (BMAG).

BA (Hons) Architecture (RIBA Part 1 Exemption) students were given the opportunity following a major restructure of the BMAG Trust’s galleries.

The project was part of Collaborative Laboratory (Co.LAB), a cross disciplinary architecture and design initiative within Birmingham School of Architecture and Design. CO.LAB focuses on live projects and research where students and staff engage with real clients, delivering outcomes across a range of scales and formats.

New research in museum design states that visitors absorb more information based around human narratives (stories) – using the artefacts in a museum’s collection to reveal aspects of the main protagonists or events in that story. In response to this, BMAG wanted to base its collection around 100 stories.

Students were tasked with taking five of the gallery’s stories and developing their own display structures to display the artefacts in a way that retold the stories to a public audience. Working in groups of four, they were given a story already set out by the museum curators based on a key part of Birmingham’s history. Each story had its own gallery space in BMAG and a number of artefacts used to enrich and envisage that narrative.

Community groups had been part of the museum’s initial research so students used the oral histories workshop to engage community members in their design processes. They also took part in another two workshops prior to creating their displays, one in BMAG, recording the environment and the interior quality of their selected gallery and the second in BMAG’s Collection Store – where they undertook an exercise to appreciate how all the objects are storage and labelled.

The four month project included: documenting their research and design processes through a blog, presenting the group process in a format of their choosing (film, documentary, animation, booklet etc.) and producing a final group ‘room set’ model of their display structures at a scale between 1:5 – 1:20.

Curation and exhibition design was a new area for students and BA (Hons) Architecture student, Huma Mahmood, commented on how much experimentation and research goes into creating an exhibition that reads well with museum goers. She worked on a story called ‘Jewel in the Crown’ with museum curator Rebecca Bridgeman, which was named after the controversial topic of Britain invading India and stealing the prized Jewel from the Punjab. Reflecting on how much she enjoyed the project she said:

I think it was definitely a great experience and introduced a different yet enlightening perspective when it comes to designing space. The highlight was probably talking to the curator and learning more about the history of the artefacts.

BMAG were keen to present all five group models in the museum, informing the public of their renovation works and revealing the curatorial process. Therefore, the models needed to be of exceptional quality and accompanied by a document explaining the creative development of the physical model.

Rihards Saknitis, another student involved with the project, looked at the unique stories of several animals’ lives before they were taxidermized. His group retold this story by focusing on the deaths of the animals and how they were directly or indirectly the result of human actions (work pictured). Commenting on the collaboration with BMAG, Rihards said:

I believe curation has strengthened my story telling and user analysis skills, which will help designing onwards. Along with finishing the 1:20 scale design model, a highlight for me was talking to Andy, who helped curate our project, about how the design could evolve into an actual project.