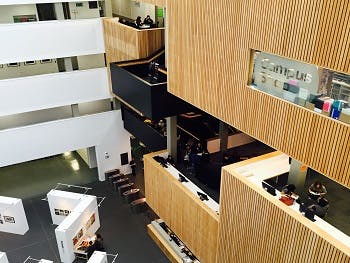 Catherine Kemp, student on the Conservation of the Historic Environment course will be presented with the Terry Keegan Award by The Milestone Society for her ‘excellent’ reports on both stone and metal conservation.

The presentation will be made on Thursday 15 October, 12.45 at Birmingham City University’s state-of-the-art Parkside Building by Alan Reade, The Milestone Society’s Highways Liaison Manager. The audience on the day will include Terry’s daughter Alison as well as Catherine's fellow students on the course.

The Award comprises of a carved trophy by one of the Society’s members Lionel Joseph, a cheque for £100, a commemorative Horse Brass to retain with a copy of Mervyn Benford’s Shire book “Milestones” and a year’s subscription to the Society. Catherine Kemp said:

It was interesting to read about Terry Keegan- I didn't know the background to the setting up of the Society and to hear about Terry's work in many areas of conservation. I've just finished reading Akenfield, which got me thinking about the transition of farming from horses to tractors and the loss of so much knowledge about working horses on the land which must have been so ubiquitous only a few generations ago.

I studied history at university and was particularly interested in the history of trade both within this country and beyond, and how trade spreads ideas and develops the infrastructure often still visible today.

Harriet Devlin, Course Leader for the Conservation of the Historic Environment said:

Catherine’s assignment on stone decay was an exemplary report on the stone of St Martins in the Bullring- Birmingham. Identifying the problems with the stone, its decay mechanisms and causes as well as a palette of proposed repairs, overall reflecting a useful and comprehensive piece of work.

Likewise her piece on metal decay comparing mild steel and wrought iron repairs was another very useful piece of work. It is fantastic that the Milestone Society continue to provide their support and celebrations of the Conservation of the Historic Environment students here at Birmingham School of Architecture and Design.

Catherine now continues her studies on the course whilst also planning future collaborations with the Milestone Society on the Warwickshire Gas Lamp Signposts Project. The student is also currently working for the Heritage Lottery Fund. Catherine added:

I started working as a development officer at the Heritage Lottery Fund in 2013. My role is to support groups making applications, in particular I work in Sandwell and across the Black Country which means I get to see many fascinating aspects of industrial heritage and to think creatively about how it can be safeguarded for the future.

The award was named after the late Terry Keegan, who died in June 2012. Terry was one of the founders of the Milestone Society in 2000, which grew to 500 members within five years.

Milestones are classified as ‘listed buildings’ by English Heritage. Unlike most other ‘listed buildings’, single milestones are not grand enough to have a ‘Friends’ association or be cherished by an individual; milestones and guide stoops are mostly owned by the Highways Authorities and are distributed in the landscape, often being destroyed as roads are widened, or becoming victims of collision damage, smashed by verge-cutters, stolen for sale or deliberately vandalised.