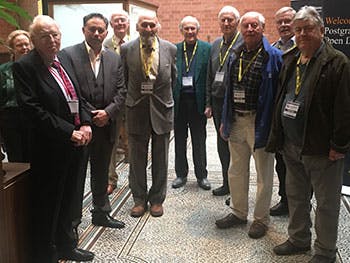 The School of Architecture and Design recently welcomed members of the graduating Architecture class from 1955 and 1956. The tour party consisted of eight alumni, some of whom went on to become lecturers and senior lecturers within the School, which was based at Margaret Street at the time.

One member of the touring alumni was Graham Winteringham. After graduating in 1949, Graham returned to the School as a lecturer in 1952 and served as senior lecturer until 1957. Graham designed the first Crescent Theatre in 1964, which was the first theatre in Europe to have an adaptable auditorium.

The alumni were welcomed by the Head of the School, Professor Kevin Singh, before being given a guided tour of the Margaret Street building. Joining them on the tour was BCU alumnus Matthew Goer, who is currently the Managing Director at Associated Architects.

Matthew talked through the architectural changes and refurbishments that have happened to the building across the years, alongside the considerations needed due to it being Part 1 listed. The work completed by Matt and colleagues at Associated Architects saw it receiving a Royal Institute of British Architects (RIBA) Architecture Award in 1996 and Civic Trust Award in 1998.

After the tour the group came across to the Parkside building, the current home for the School of Architecture and Design. The group were also given a tour of the industry standard facilities, workshops and studios available to the current students.

I was very honoured to host the Class of 1955 and ’56. Meeting alumni groups such as this is one of the perks of being Head of the Birmingham School of Architecture and Design. It was fascinating to hear the group recall their memories of studying at Margaret Street, some funny, some serious, and some not suitable for print!

"They were intrigued by a modern School of Architecture, especially the 3D printing facilities and the diversity of our student body. It’s always heart-warming to see graduates from whatever era have much a passion and affinity with the School."