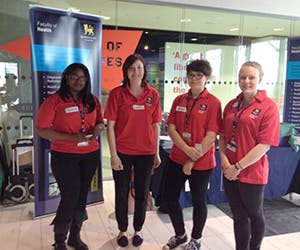 Pioneering research from Birmingham City University was on display this week in Birmingham City Centre, to celebrate the launch of the British Science Festival - helping to mark this year as Birmingham’s ‘Year of Science.’

Explosive experiments, live talks, ‘science buskers’ and science-filled canapés were a few of the activities on display for spectators at the lunchtime launch of the annual festival, which took place on Tuesday 8 April at the Library of Birmingham.

A team of health experts were on hand from the University to demonstrate the use of the ‘Vibrating Suit’ - a breakthrough solution for posture improvement and the reduction of back injuries. The suit monitors an individual’s positioning and then provides immediate feedback – a ‘vibration’ – when the body is exposed to poor posture. The suit actively helps to address potential back issues before they develop into a serious or more complex injury.

Lubo Jankovic, Professor of Zero Carbon Design at the University, gave a lecture on his innovative solution to reducing carbon footprint. Professor Jankovic has previously applied his research to the unique Birmingham Zero Carbon House, a 170 year old Victorian residence that has achieved zero carbon status and zero energy bills through retrofit.

Professor Jankovic said; "There is enough energy. Every house in the UK receives more energy from solar radiation on the roof surface than all heating and electricity energy that it needs for the entire year.

“The current level of the world's technological development does not enable that this energy is fully utilised, and we need cutting edge research to succeed in making every house in the UK a zero energy, zero carbon emissions house, which would make energy bills and fuel poverty a thing of the past."

A number of research projects from the University will be on display at the British Science Festival later this year.

The British Science Festival will be coming to Birmingham in September, 6-11 September, with an expected attendance of 60,000 people. The five-day festival will feature over 250 entertaining and thought-provoking events and activities appealing to everyone from family groups to professionals.

Birmingham is recognised as being at the forefront of scientific and technological advancement and the presence of the British Science Festival will enhance this reputation. The Festival offers an unrivalled opportunity for the region to showcase its science and technology credentials to the UK and around the world.

The Festival, which visits a different city each year, is aimed at celebrating all things scientific. Organised by the British Science Association, the event encourages researchers to share their work with the public.