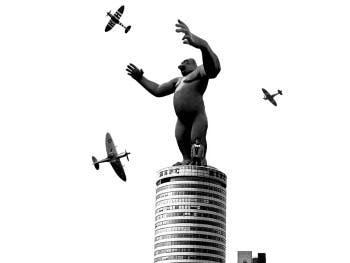 Students and staff from Birmingham School of Art, School of Architecture and Design, and School of Visual Communication collaborated with art and architecture students from Leeds Beckett University on The King and I exhibition. The work was in response to the current presence of Nicholas Monro’s sculpture of King Kong in Leeds. Several established artists took part in the exhibition, which was open to the public throughout February.

The King and I exhibition built on Monro’s idea of disorientation and reflected on the changing status of the King Kong sculpture over time, including the memories, narratives and mythologies that have surrounded its often mysterious disappearances and reappearances, and the varying reactions to its public display.

The collaboration between the two universities came about due to the fact that King Kong was originally commissioned for the city of Birmingham.  Responding to the 1972 brief that the city sculpture commissions should be “city oriented”, Monro chose instead to create an image of urban disorientation in the figure of King Kong.  The exhibition included work in printmaking, audio art, sculpture and digital 3D modelling, produced in a collaboration between the universities.

Students from Birmingham School of Art are contributed to The Eighth Wonder element, submitting their work as a new soundtrack. The film has been separated into 30 different sections, with students from both the School of Art and Leeds Beckett University contributing new scores.

Tom Tebby, a lecturer in the School of Architecture and Design, has contributed his piece The Kong and I (pictured) for the project.

I imagined Nicholas Monro (King Kong sculptor) coming to Birmingham to get an idea of what kind of sculpture he could make for the city. Standing in Manzoni Gardens with the Rotunda towering over him I imagined he probably felt it was a bit like New York and then it dawning on him that the Rotunda was Birmingham’s answer to the Empire State building – all it needed was a sculpture of King Kong.