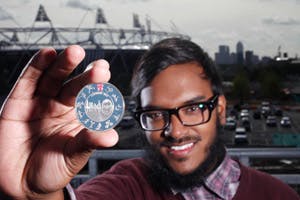 A Birmingham City University student has been given the honour of designing the official UK Coin to celebrate the London 2012 Olympic and Paralympic Games.

Birmingham School of Architecture student, Saiman Miah, won a prestigious competition to create the design for the official London 2012 Olympic coin – which will soon be in the hands of Games enthusiasts around the world, ahead of next summer’s Games.

Since the Helsinki summer Olympic Games in 1952 it has been tradition for commemorative coins to be struck in celebration of the Games. Now Moseley student Saiman joins the artistic elite by creating the new £5 coin design which will be a permanent and much-treasured memento of London 2012.

In previous years the official UK coins have been designed by a renowned artist or sculptor - Saiman’s design was selected following a Royal Mint competition for art and design students attending higher education colleges and universities across the UK. Students were challenged to create a design celebrating the capital’s role as host city of London 2012, including the Olympic and Paralympic Games logos. Designs were requested that could be symbolic or literal and could involve the use of emblems or lettering.

Currently studying for his Master’s degree at the Birmingham School of Architecture, Saiman first became interested in art during his secondary school education. After completing his Art Foundation course he chose to pursue his passion for architecture. Inspired by his love architecture, Saiman’s design for the official London 2012 Olympic coin captures a snapshot of the London skyline including the London Eye, Big Ben, Westminster Abbey and St Paul’s cathedral; which act as a backdrop for the iconic River Thames.

As well as the honour of designing the official coin Saiman also receives £5,000 prize money. The £5 coin, which is legal UK tender, will go on sale this month and is expected to be collected by thousands of Games enthusiasts around the world.

Kevin Singh, Head of Birmingham School of Architecture at Birmingham City University, said: "We are absolutely thrilled that Saiman has won the competition to design the Olympic £5 coin. It is an incredible achievement for one of our students to be part of Olympic and UK history.

“Saiman has studied at Birmingham School of Architecture for both his degree and now his Master’s in Architecture and it shows what a fantastic all-round education architecture offers. Saiman’s success demonstrates to fellow students that with a pro-active and enthusiastic attitude, the world really is your oyster. The School, the Faculty, and University whole heartedly congratulate him on this accolade."

As well as the honour of designing the official coin Saiman also receives £5,000 prize money. The £5 coin, which is legal UK tender, will go on sale this month and is expected to be collected by thousands of Games enthusiasts around the world.