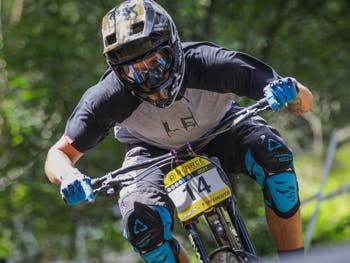 With the new academic year swiftly approaching, a Birmingham City University student will return to his studies as one of England’s fastest downhill mountain bike racers.

Second year undergraduate Will Weston from Wolverhampton finished fourth in the English Championship finals held at Hopton Woods in Shrophire on Sunday 13 August.

On being the fourth fastest downhill mountain bike racer in the country, the 20 year-old architecture student said:

“I’m happy with my achievement at the English Championship; the UK leads the way in my sport and has a depth of talent unrivalled by any other nation, and to prove myself capable of competing at this level whilst studying full time is something I am very proud of.”

Studying on the BA (Hons) Architecture at Birmingham City University also makes Will Weston the highest ranked downhill racer in the UK in full time higher education, which puts him in a good position ahead of the 2018 British Universities and Colleges Sport (BUCS) Downhill Mountain Bike Championships.

On carrying out his studies concurrent to his sporting commitments, Will Weston said:

“Balancing university life and competing against full time athletes is a difficult challenge, but nothing worth doing comes easily.

I’m passionate about architecture – I would say that my priorities are firmly planted in the course and my future career – but rubbing shoulders with some of the world’s fastest mountain bike racers in my down time is something that I enjoy immensely.
Will Weston

“I have thoroughly enjoyed my first year with Birmingham City University; I had to make difficult compromises at times, but with the support from some fantastic individuals at the Birmingham School of Architecture and Design I'm happy to look back on a year with plenty of Firsts in the design studio, and on the race track.”

Downhill mountain bike racing sees competitors sprint down marked-out courses on mountains all across the globe, with the fastest rider from the top to the bottom being the winner. Courses come complete with obstacles – such as jumps, corners, rocks and roots – ensuring that racers have to match their speed with skill and agility.

Will competes as one of only 40 Elite (pro) downhill riders in the UK. Elite status is achieved and maintained by gaining points during events throughout the season. Racers can be promoted in to the top 40 or relegated to lower leagues, much like in football.

Will first started racing when he was 11 with special permission from British Cycling – the youngest category is 12-14 – and has gone on to compete at 130 career races across the UK and abroad so far, with a record of 21 wins and 68 podium finishes.

He has been crowned Midlands Champion seven times and will be defending that title once again in 2017.