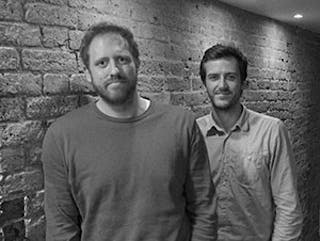 Dan Griffiths and Leon Ostle have been two of the top advertising designers in London over the last ten years. They met while studying together on the BA (Hons) Visual Communication course and were already active in the industry by the time they qualified in 2000.

They began their careers as part of the founding team at Glue, successfully managing and developing the design department for eight years and building it from a team of five to over 30. The duo have run or been creative leads on accounts for companies including Sky, RBS, Toyota, Stella Artois, Adidas, Google, Guinness, Coke Zero, Mini, 3mobile, Unilever and Virgin.

In July 2013, they made the decision to strike out on their own, setting up Crew Studio Ltd. a digital design and creative studio. As founders and directors they have already worked on some large scale projects for V Festival, Rogue Films, Google and Mother.

We joined Glue as a creative marketing team – it was a very small unit so we had to be hands-on, but that’s how we like to work anyway and it gave us the flexibility to really shine, which has put us in good stead for what we’ve done since. We’d done our stints, we’d learned a lot, and going to another agency would probably have been very similar, so we decided to take on the challenge of setting up on our own.”

Dan added: “The course really opened our eyes to looking at things differently and the concept side of communication. Many of our lecturers had experience of industry and gave us a lot of guidance at the right time. I know from speaking to other people that a lot of other courses didn’t offer anywhere near the studio time ours did – we were much more hands-on, in from 9-5 every day, whereas others might just do a few hours a week.”

The pair were named Alumni of the Year 2014 for Enterprise and Innovation.