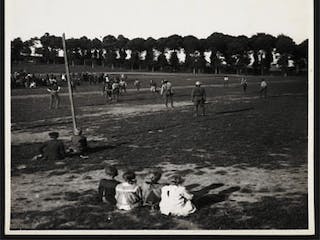 Letters and photographs from soldiers at World War One show how important playing football was to them in their everyday lives.

Dr Issa has been researching the Muslim contribution to the First World War by going through thousands of archives, personal letters and documents as part of an exhibition commissioned by and held at the British Muslim Heritage Centre.

The materials have shown how frequently football was played and that the Allies’ football teams included soldiers from Commonwealth countries such as the Muslim, Indian and Pakistani servicemen featured in the exhibition.

The research finds that football was widespread during the World War One and was played by soldiers all around the world. The soldiers weren't always working or fighting – a lot of their time was spent behind the lines, so football was a key pastime.

Officers encouraged the soldiers to play football in order to increase morale and perhaps to keep their fitness levels up too. In England, the Football Association and some football clubs would put posters up to help with the initial recruitment effort.

The pieces include a previously unreported letter from Christmas 1915 (dated December 27) from soldier Nisar Muhammed Khan to his brother in Peshawar, located at the time in British India and now part of present-day Pakistan. In the letter he apologises for his lack of contact and explaining that he has little free time due to training every morning for the football team.

The letters and photographs are a part of the Stories of Sacrifice exhibition at the British Muslim Heritage centre in Manchester.