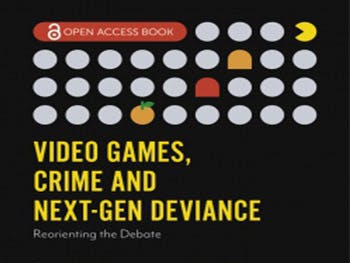 A new book release from researchers in the School of Social Sciences critically analyses the effect of video games and the wider industry on society, while arguing against popular media discourse which positions video games as a catalyst for violence.

These topics include LGBTQ representation, depictions of criminality and the more recent trend of gambling mechanics and predatory sales tactics embedded in some video games.

On 2 July, the House of Lords Gambling Committee called to regulate loot boxes under gambling laws.

As stated in the book ‘The ability for a person to take part in ‘pseudo-gambling’ through video games leaves them open to the implications that can occur from excessive traditional gambling.’

Kelly, Lynes and Hoffin argue that issues such as these should be the focus of video game criticism, not simply the blinkered approach of the past where violent video games have been viewed as a catalyst for violent acts.

I think the key finding of the book is that it shows rather conclusively there is more to video games than them being a causation of violent acts or not.

The book began as a response to the popular and political discourse around the influence of video games on violent crimes such as mass shootings, as well as the studies that have previously explored this connection. Craig said:

‘Previous studies have tended to go back and forth with little conclusive evidence. This book, and the wider project, seeks to finish the benign discussion of video games vs violence and progress onto exploring other harms that can be caused, embedded, commodified or embellished within video games.’

Craig and his colleagues hope this book will help reorient the debate around video games and criminality, taking a more nuanced approach which responds to current trends, rather than using the medium as a scapegoat.

‘Our next stage is to stimulate further debate and hopefully others will begin to recognise the harms from their own areas of expertise and we can really begin to pay the attention video games deserve within criminology.’

Video Games, Crime and Next-Gen Deviance is an open access book, which you can download for free.