Birmingham Conservatoire is delighted that REF 2014 has reconfirmed the extremely high level of its Music research, assessed as equal third among UK conservatoires in terms of grade point average. 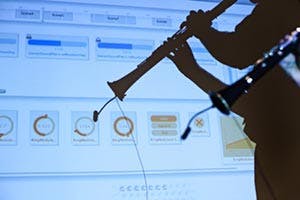 Work in the Music and Performing Arts unit is carried out by the Birmingham Conservatoire where research is focused in four areas: musicology, music technology, composition and performance.

See our full UoA 35 submission on the REF website

Our musicological research is concentrated into four informal groups:

Our research in music technology is centred on Integra Lab, an interdisciplinary research lab with a focus on musician-computer interaction. It is a direct spin-off from the international Integra Project, a €3 million two-phase project funded by the EU from 2005 to 2011. Integra included multiple partner organisations from Europe and North America and set new standards in the integration of music technology with creative practice and performance.

Research at the Conservatoire aims to extend the agenda of musical creativity, in challenging assumptions surrounding the nature, content and presentation of new music, especially in terms of venue, subject-matter and audiences. Our work embraces both technology and innovative score-based and improvisational practices.

Find out more about the great research at Birmingham Conservatoire.
Go to Research Stories >>

Meet our researchers and read more about their work and areas of expertise.
Go to Research People >>

The Centre for Music and Performance (CMP) is the focal point for research.
Go to CMP >>