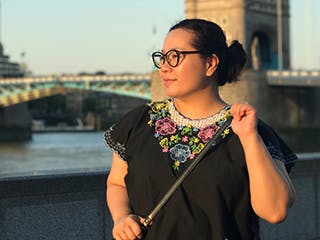 After graduation Baby Ruth has been involved in different film projects as a director or producer, and has also been selected to be a member of the Oscars Awards team representing the documentary branch.

Why did you choose to study MA Film Distribution and Marketing and how has it helped you to prepare for your career?

The lack of applicable knowledge in the marketing and distribution of Southeast Asian independent films inspired me to pursue the course so I could help my fellow filmmakers and producers bring their films closer to the community.

MA Film Distribution and Practice helped me to fully understand the business side of making films and how to effectively propel the economy of the film industry. They say that it takes a village to make a good film. My post-graduate course taught me that it takes the best people in and outside the village to build the right momentum for a great film.

How would you describe your course and what did you enjoy most about it?

The course at BCU is a combination of theory and practice that provides a solid base for everything you need to know about film marketing and distribution. I really enjoyed all the live projects, internships, study tours in both commercial and art house set-ups, and the active engagement with the industry that elevated the theories into practical usage. I have fond memories of getting exposed to new strategies every week from the mentors at BCU who are also film practitioners themselves, and I always looked forward to these sessions to improve myself.

Can you tell us about any of your professional achievements since graduation?

The course at BCU has inspired me to design a similar programme back in the Philippines, and this idea led to the foundation of the Film Producers Society (FPS) - a young organisation composed of film students (now young film graduates) who do live projects — organising marketing campaigns and screenings of independent films with filmmakers and producers. This organisation which includes proactive interactions with producers and cinemas has created a better understanding and appreciation of film marketing and promotion on local films and have helped them to reach their box-office potential.

FPS was recently selected by British Council Philippines to be one of the promising creative hubs in the country. I would like to learn further creative hub management so we can hopefully know how to build the first ever public film library in the Philippines - a creative space where people can research, work, exchange ideas from the best of world cinema.

Can you tell us about your current role or any projects that you are involved in?

Since graduation, I continued making documentary content for local and international television via co-production as either a producer or a director. From time to time I get commissioned by international organisations in the UK as a country Producer for the Philippines and South Asia. I am also actively co-managing Voyage Film Studios and Film Producers Society that push Filipino stories reach a more global audience.

I am currently a member of the National Commission for Culture and the Arts Cinema committee - championing the causes of the independent film sector; I’m also a board officer of the Directors’ Guild of the Philippines, all of which are volunteer jobs. Alongside, I’m also directing two new independent documentaries with the working titles “Touch the Colour” and “The Boy with new Shoes” under Voyage Film Studios.

I still continue mentoring groups in filmmaking - I regularly go to film conferences and film events, and happily attend screenings of my films to do Q&As locally or at some festivals in other cities.

How did you become a member of the Oscars Awards team?

It feels incredible to be part of the Academy Class of 2019 with the world’s finest storytellers. A while ago the Motion Picture team requested some details about my work and links to two films I directed - "Jazz in Love" and "Sunday Beauty Queen" – a film edited at BCU and supported by Doc Society (formerly Brit Doc).

When I received an email stating that I was officially part of the Oscars team, I thought it was a spam email, but when people started tagging me on social media it became more apparent and real that I now have this new role to represent not just my country but to champion the entirety of Asian cinema. As a member under the Documentary branch, I need to watch at least 15% of all documentary submissions from all around the world.

What would your advice be on securing a job after finishing university?

I remember my grandfather’s advice to me, which I keep close to my heart every time I need to remind myself of it. He said: “Follow the money and you will be indebted for life. Follow your dreams so the money will follow you.” Every small decision is important to lead us to where we want to be.