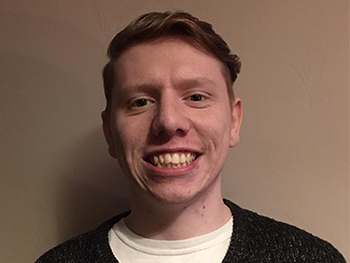 What types of projects can students get involved with on the Film and Screenwriting course?

Film and Screenwriting students will get the opportunity to practise their skills in screenwriting as well as filmmaking.

What has been the most fun or interesting project or activity you have been involved with?

I got the chance to volunteer at the film festival run by our Course Leader Xavier Mendik, called Cine-Excess. During this festival I got the opportunity to meet and talk to various horror film directors such as The Soska Sisters, Nathan Catucci and Norman J. Warren. I then helped film interviews with each of them. I also got to meet Paul McEvoy who was a guest lecturer - he runs Fright Festival which is THE premiere Horror film festival in the UK.

What trips have you been on so far?

At the start of my first year, we took a trip to the BFI in London. I'm looking forward to other trip opportunities as they come.

Have you had any opportunities to work with professionals from the film industry?

I had the opportunity to talk to the screenwriter Trevor De Silva, who wrote the film A Royal Night Out. He gave us a valuable insight into his role as a screenwriter and what to expect when working on a big production. We also had the National Film and Television School come in and talk to us to give us information about the film industry and the opportunities available to us, such as volunteering at the National Film and Television School.

What do you enjoy most about your course?

As a student who did a year at a different university, I can say that the opportunities available to me at BCU have dwarfed the other university. I also feel that the tutors and lecturers aren’t people who used to be in the industry, but they’re people who are still very much in the industry. They have valuable connections within the industry and will help us get in touch with the right people providing we put the work in and have something tangible to show. If our work isn’t at that point then they will provide us with feedback in order to get it to that point. Overall, I’m very happy with the opportunities and tutors/lecturers and feel confident they will point me in the right direction to get a job within the film industry

What advice would you give to a student about to start your course?

I would say that they should get involved with as much as they can within the course. I never thought that I would have done half the things I’ve done at BCU, and I would never have done them if I didn’t volunteer.