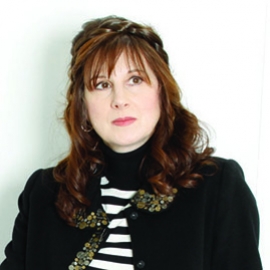 Starting life as a creative artworker in a design consultancy for 17 years, my creative journey has arrived at this creative degree course.

This B.A. Visual Communications course allows me to create my own projects allowing me to gain realistic outcomes in exciting new areas. My specialisms are Editorial design, Print-making and reproduction, Branding and more recently Surface Pattern design where my Major Project combines that discipline with editorial design. This is an area which particularly interests me. 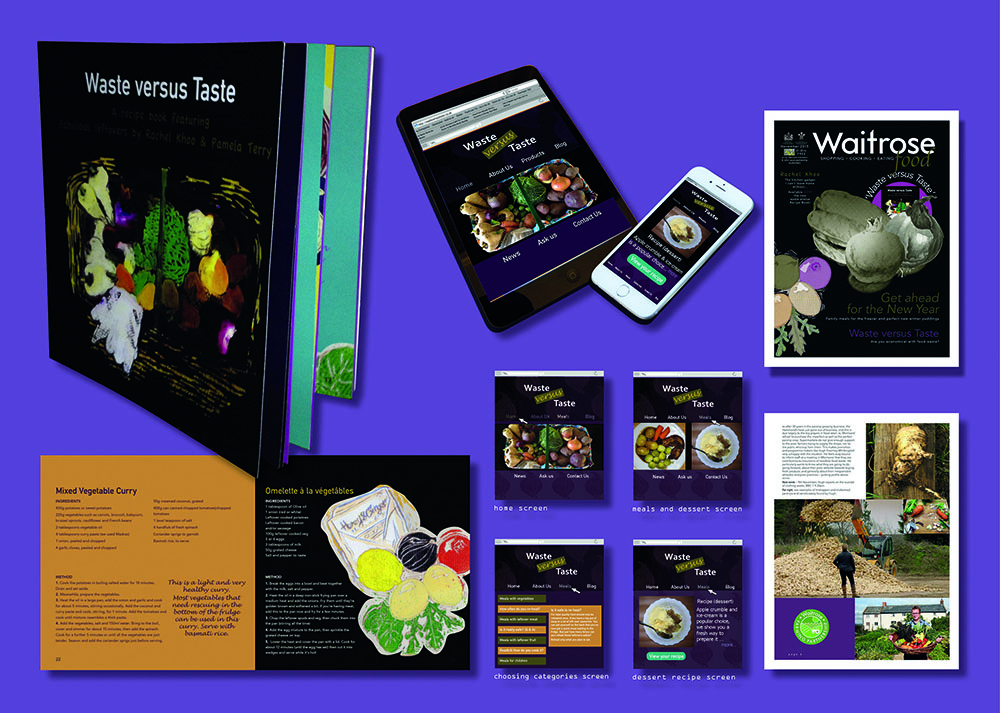 Waste Not Want Not (RSA Brief)

This is my approach to the Wast Not Want Not Brief for the RSA organisation. I was trying to achieve a balance between an editorial design and branding project for this large project creating a responsive approach to the problems of too much food waste in the home and in businesses.

Waste Not Want Not, for me encompassed a 60-page Recipe Book encouraging families and their children to make meals safely from left-over and imperfect vegetables. This meant that the book had to be colourful and child-friendly to use. The bias for small businesses meant that I had an idea to encourage small groups of like-minded people to form co-operatives or voluntary food growing facilities, similar to Eastside Projects in Birmingham has, to base a way a life on growing and living off themselves sustainably.

This also included branding the book and other merchandise, and advertising it in Waitrose's own magazine, and in store. It also included website design and app development, so the visuals include these outcomes as well. 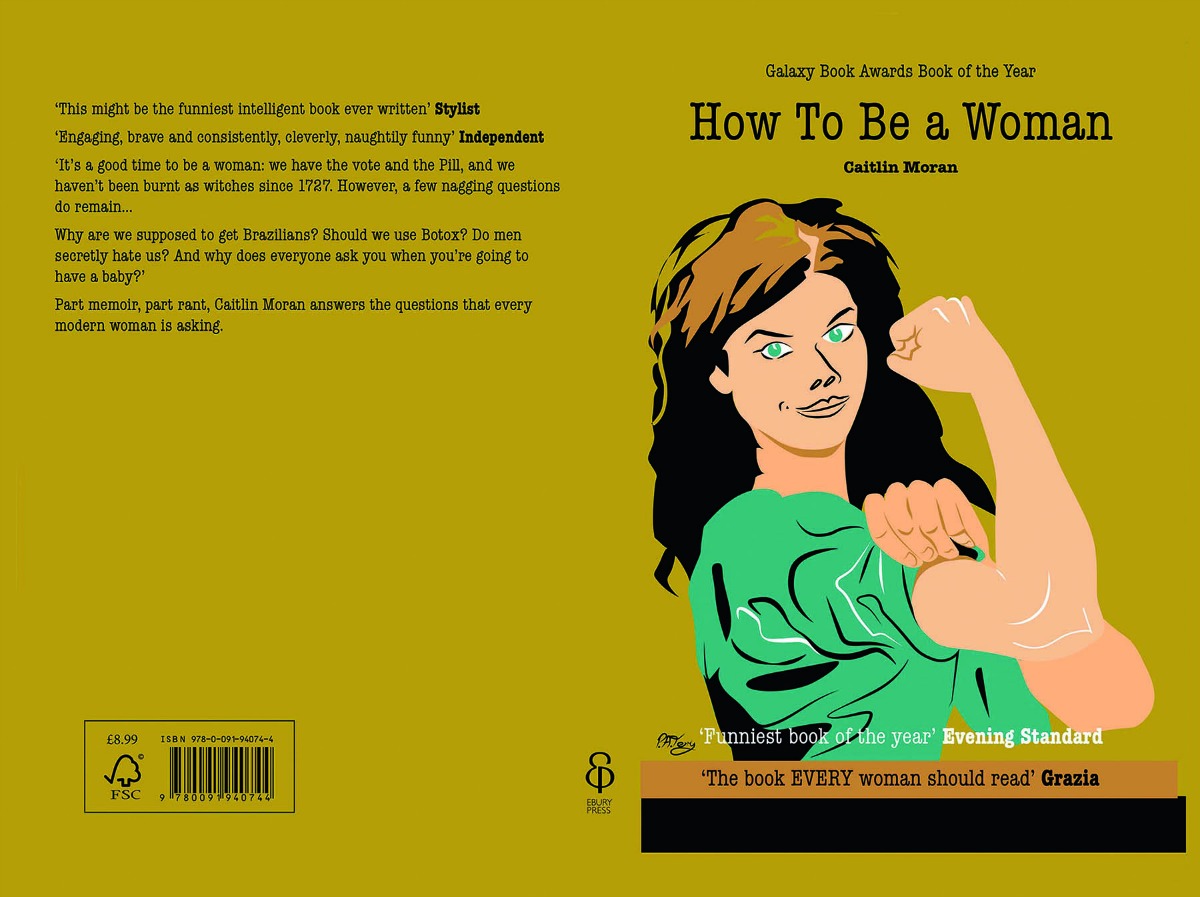 'How To Be A Woman' by Caitlin Moran (Penguin Books)

This piece is a paperback book cover for a competition brief. It celebrates the work and life ethic of the newspaper journalist Caitlin Moran. Her life and work is devoted to putting the female point of view across to others, celebrating women at in every aspect of their life.

The design for the front and back cover has been produced using screenprinting in five colours on different paper stock. The cover I made up on a prototype of the book was printed on brown craft paper. This could be a series of artworks for famous journalists and authors using the screenprinted style and medium. 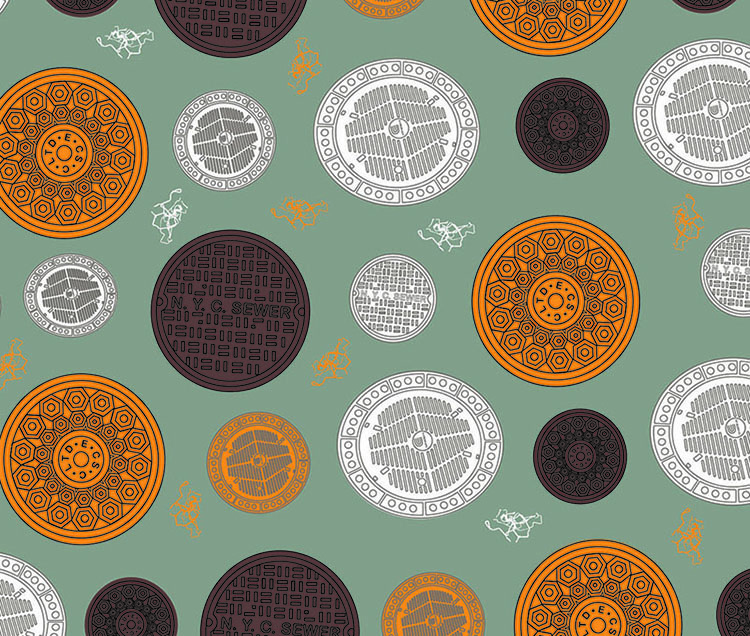 This is one of a series of repeat patterns produced for the resource book I am producing for one of the outcomes for the Major Project. The idea was to take inspiration from 1000 photographs I took whilst walking around New York city on a trip in February 2016. The excitement for producing the outcomes was that I was to try to take references from looking down initially, then below waist height, then the mundane items that people usually ignore because they have seen them so many times before.

The production for this project included the above submission in a colour branding exercise showing that the pattern could be produced on paper and on fabric in a series, ie: 'NY Manhole Greys', 'NY Manhole Linear', 'NY Manhole Classic', 'NY Manhole Blues'. This is what I did with eight patterns altogether to produce an interesting book featuring the designs printed over an A4 landscape spread (over the gutters - no pun intended…). The book also includes other great facts and figures about the topics I chose.

With this project brief, the idea was to produce a series of designs and to evolve them into surface patterns for print on paper, and on different substrates such as fabrics. This would become a resource book for print and graphic designers, interior designers and publishers to use these. This could be by purchasing a license to use the basic pattern, and paying for the copyright for use. They would then be allowed to adapt the pattern for their use.

I also wanted the resource book to be a beautiful item in itself, so it was also an editorial design project encompassing colour and branding for possibly a series of books showing a range of patterns for many uses. 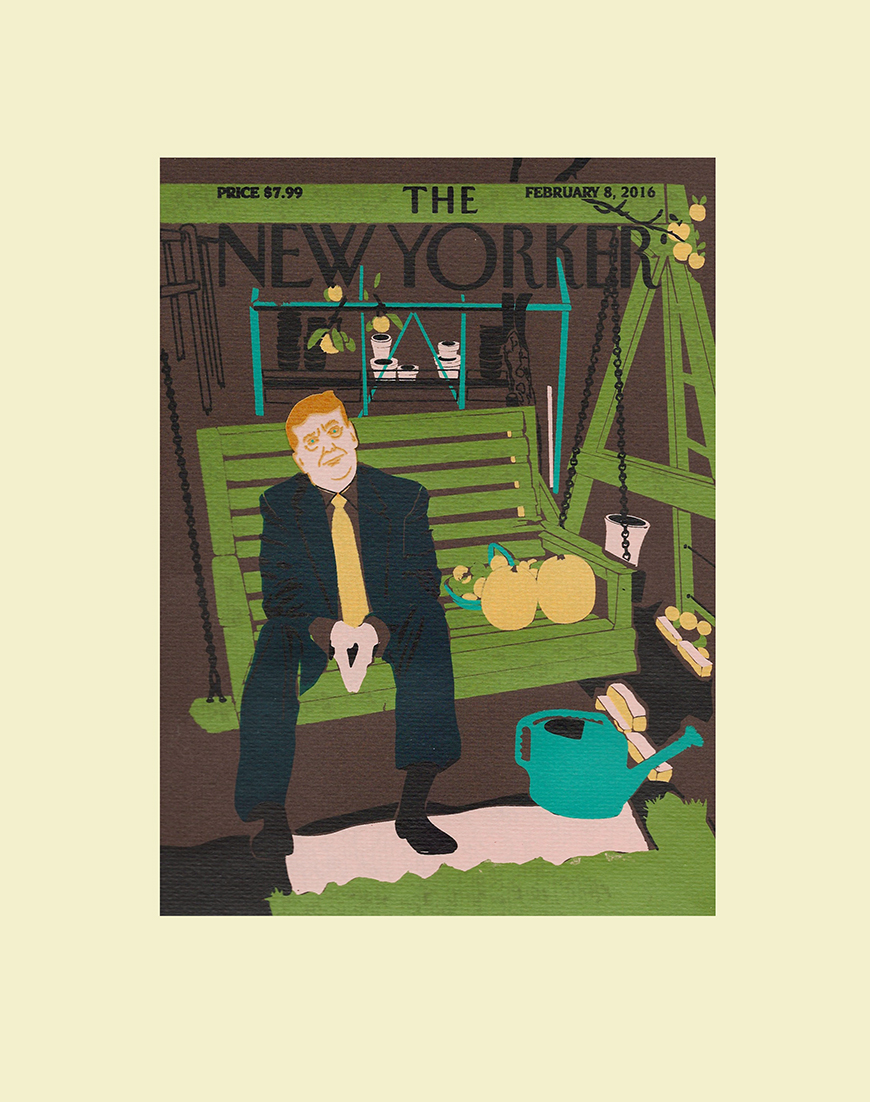 This is a cover for the 'New Yorker' magazine which has been designed to show commentary about a political event upcoming this year, ie: the election of the new President of the United States of America. Produced as part of the outcomes for my Major Project on New York and its influences on me, I decided to produce a cover that could show a new Republican President – Donald Trump in the role. In reality, he is just sitting on my garden swing looking at the harvest around him which includes apples and pumpkins, reiterating the time of year for the publication of this issue.

The medium used is also screenprinting in seven colours, which I did on several paper stocks. This 'we are cherries' example shows a printing on dark brown ingres paper.

This image shows a typical double-page spread from the book, pages 31-32. It shows the repeat surface pattern called 'NY Fifth Avenue', and is a 'classic' and 'blues' version.

They are all created by drawing with fills and strokes produced using Adobe Illustrator. 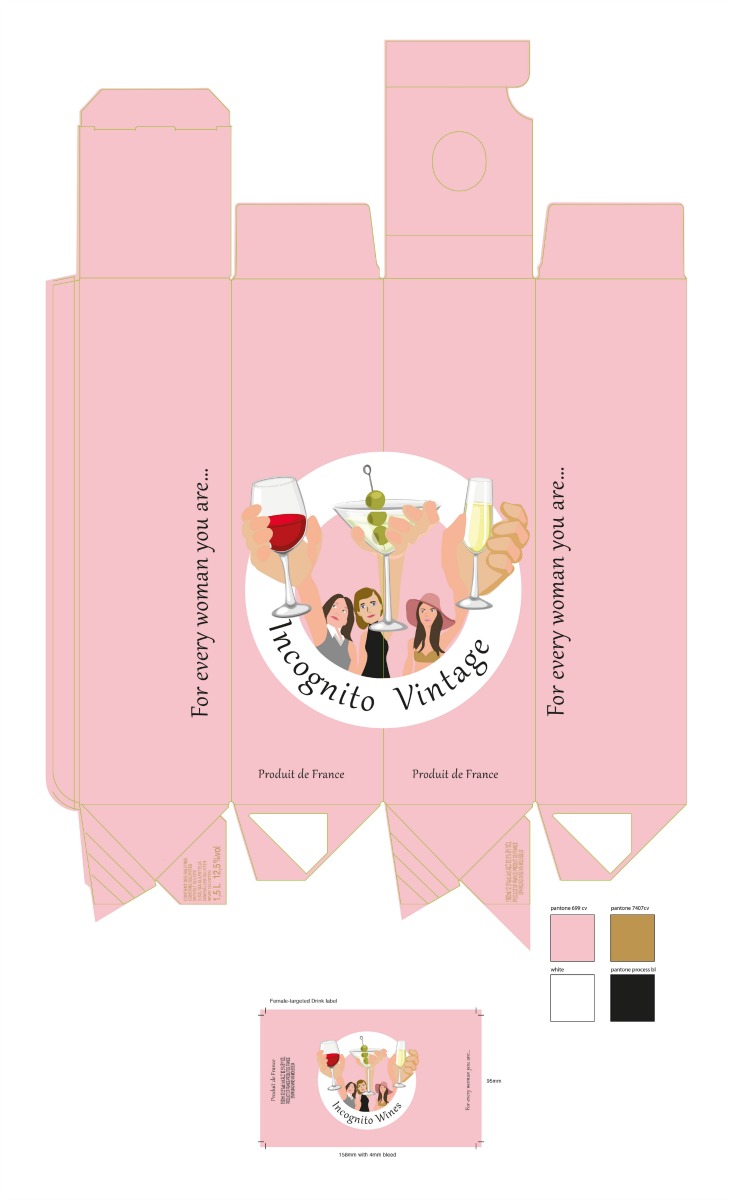 This is an example of drinks packaging designed to appeal to professional females – and their females friends from all walks of life. They can be professional working women or family-orientated women. The packaging aims to cross all boundaries. The imagery refers to an office professional having this wine at lunch or in the evening, another image shows a woman at a night club, and yet another at the beach.

The design for packaging has been produced using overlaid fills in Adobe Illustrator. 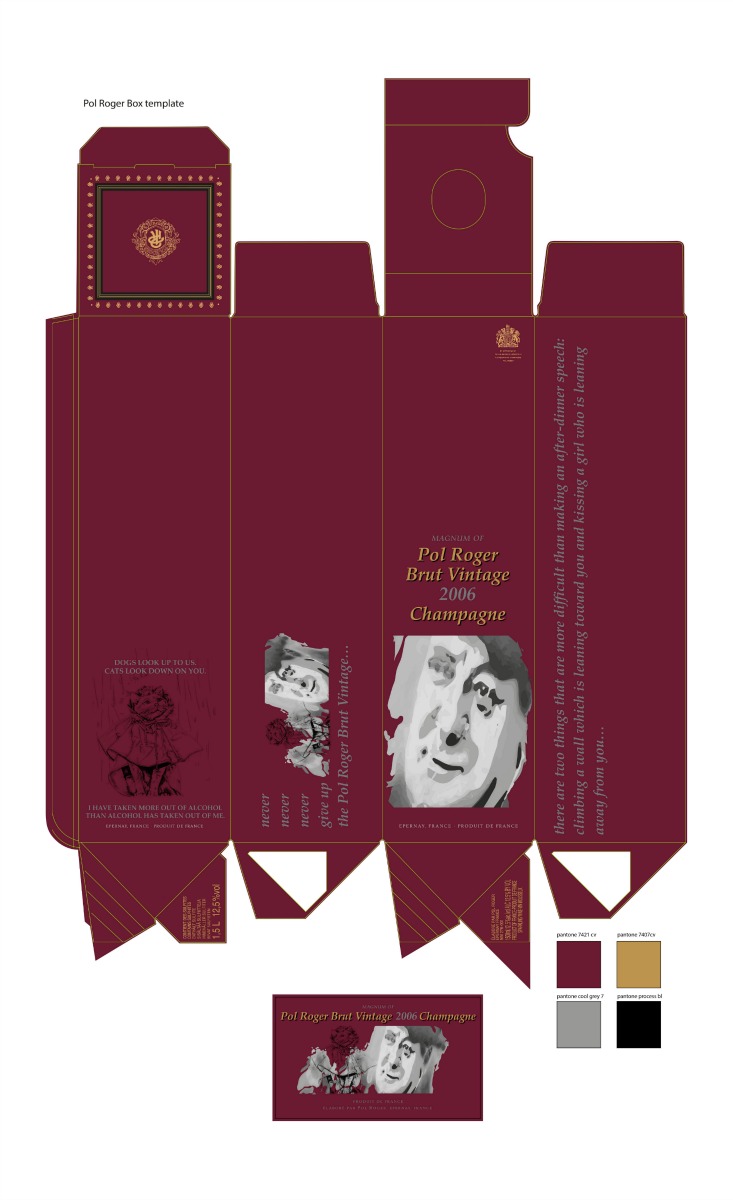 This drinks packaging is a strong gift box designed with imagery of Winston Churchill, and an example of his pet cat. He was a great cat lover and this packaging represents what he loved in his life.

This project brief is very similar to the 'Female-targeted drinks packaging by 'Incognito Vineyards', but the feel and the audience for it is very different. This one is to appeal to men over fifty years, and uses the colours: gold, silver, deep magenta and black as these are the colours I felt that men would appreciate in a great bottle label and packaging.

The design is produced as linear and filled work using Adobe Illustrator.