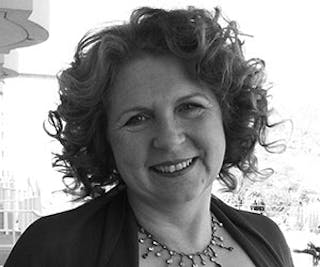 Jude Farr's recreations of other worlds have been seen by millions of viewers on both large and small screens across the globe. From Downton Abbey to the King's Speech, set designer Jude has worked on numerous film and TV productions and has attracted nominations for some of the most prestigious awards in the industry.

Being exposed to television from an early age, Jude would often accompany her dad, who worked at the BBC in London, to watch programmes being made at Television Centre. This inspired her to go into the industry herself and she decided set design was the career for her. Making her move to the West Midlands in the 1980s to study BA (Hons) Theatre Design at Birmingham Polytechnic, she gained experience working at the REP theatre, where she continued to work after graduating, as well as helping overhaul the costume gallery at the Birmingham Museum and Art Gallery.

She went on to take various temporary jobs in London, before gaining an interview at the BBC and a number of temporary contracts followed, which gave her the opportunity to work on programmes such as Blue Peter, Jackanory, Rory Bremner and Blackadder the Third.

With an ambition to make her mark in films, Jude decided to move on and went on to work with names such as Stanley Kubrick and John Goodman.

Her more recent work includes designing the set for blockbuster film The King's Speech, for which she received BAFTA and Oscar nominations, and working on the second series of ITV1's Downton Abbey, a show that has attracted over 10 million viewers in the UK, as well as proving popular across the Atlantic.