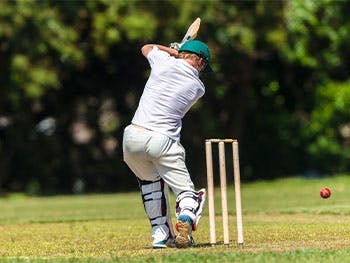 A doctoral researcher’s investigation into the overrepresentation of privately educated cricketers in the professional game has been featured on a leading sports channel.

Tom Brown saw his data on the disparity between private and state school-educated cricketers feature as part of a news report on Sky Sports Cricket.

His research found that 56 per cent of Under 16 – Under 19 cricketers, and 45 per cent of professional players, were White-British and attended independent schools.

This means that, conversely, that a lack of access to wealth has created barriers to participation and development in cricket for those not privately educated.

The opportunity for Tom’s research to feature on Sky Sports Cricket arose from him speaking to Ebony Rainford-Brent, a former cricketer turned Sky commentator.

Rainford-Brent then shared a screenshot of the data on her Twitter page, causing widespread debate and showcasing the difficulties state school-educated cricketers have in breaking through.

Tom feels his research being shared through the media may invoke some positive discussions.

“It has already sparked several conversations with journalists and broadcasters,” he says. “I have been in contact with key stakeholders in several counties, as well as the England and Wales Cricket Board.”

The benefits of media coverage

Sky Sports Cricket showcased the regional breakdown of Tom’s statistics, which were originally published in 2019.

Since beginning his PhD, Tom has conducted on-the-ground research with Warwickshire Cricket Club and launched the South Asian Cricket Association, which hopes to increase the percentage of British South Asian professional cricketers.

There has since been steps towards progress in the sport, with Rainford-Brent launching the ACE Programme, designed to engage young people of African and Caribbean heritage.

Furthermore, England and New Zealand cricketers wore anti-discrimination t-shirts – described as a ‘Moment of Unity’ – before their recent test match.

“Media coverage has resulted in a number of prominent researchers within the field getting in contact with me,” Tom says. “It also pressures key stakeholders into evaluating their current practices and make meaningful change.”

His research forms part of a chapter, Relative Access to Wealth and Ethnicity in Professional Cricket, co-written by Tom’s research supervisor Adam Kelly.

Tom feels the book is an important contribution to research.

“It covers a wide range of influences,” he says. “Ultimately, there needs to be a bridge built between academics and practitioners in order to make meaningful change.”