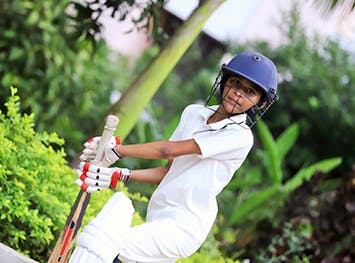 Tom, based in the Department of Sport and Exercise, has created the South Asian Cricket Association (SACA).

The new scheme aims to tackle the disparity in the number of South Asian players entering county cricket, as well as the overrepresentation of those from affluent backgrounds.

The association stems from Tom’s postgraduate research, which has previously highlighted that British South Asian cricketers face a barrier to entering the professional game.

Tom’s research has already garnered national attention, with both BBC and Sky showcasing his findings.

SACA offers bursaries, coaching and education opportunities, and hopes to increase the percentage of British Asian players within the professional game to eight percent by the end of 2024.

The scheme also aims to see 10 percent of coaches coming from the British Asian community by the end of 2027.

“SACA has been designed to implement evidence-based interventions aimed at addressing the decline in British South Asian representation in professional cricket,” says Tom.

“Although the programme will work predominantly with British South Asian cricketers, the ultimate goal is to challenge the current status quo and develop a new approach to talent identification of all ethnic and socio-economic backgrounds.”

Tom combines his work with SACA with on-the-ground research with Warwickshire Cricket Club.

He is one of many researchers based within the Department of Sport and Exercise conducting collaborative research.

For example, Francesco Dimundo is working with Worcester Warriors rugby club to assess the trajectory of their academy players. Meanwhile, Daniel Jackson has partnered with Kidderminster Harriers FC to help them minimise injuries.