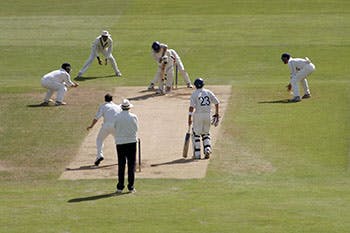 White-British cricketers who were privately educated are ‘significantly overrepresented’ at both the professional and youth levels of the game, new research has revealed.

The study from Birmingham City University showed that people from wealthier backgrounds were much more likely to make it into professional cricket than those from less affluent upbringings.

Results also highlighted that a lack of access to wealth created barriers to participation and development in cricket, contributing to an ethnicity bias in the sport on a national scale.

The research found that 56 per cent of Under 16 – Under 19 cricketers, and 45 per cent of professional players, were White-British and attended independent schools.

British South Asian players were shown to be much less likely to make it into professional cricket, despite the sport being very popular among these communities.

The results highlighted that White-British cricketers were disproportionately represented at most levels of the game, particularly those from wealthy backgrounds.

The study, published ahead of England’s Cricket World Cup semi-final clash with Australia (Thursday 11 July), took in ethnicity data from an England and Wales Cricket Board survey.

Where available researchers also analysed data on the type of school attended to measure relative access to wealth.

Ethnicity and school-type distributions were then compared with expected distributions for ‘White-British’, ‘British South Asian’ and ‘Other’ ethnic groups, revealing the demographic split in the sport.

Researchers concluded that, given the popularity of cricket amongst British South Asian communities, a lack of potential talent was unlikely to be a factor in their under-representation in the sport.

Instead, higher relative access to wealth was thought to be a key factor, as those from wealthy backgrounds are likely to experience greater opportunities and support throughout their development as a cricketer.

Although the majority of state schools offer their students cricket as part of their curriculum, the amount of extra coaches and quality of facilities provided often fall well short of what is accessible to students attending private school.
Tom Brown

It is hoped the study will prompt further investigation into the barriers that British South Asian cricketers face throughout their transition from talent development pathways to professional cricketers.

Paul Greetham, Elite Cricket Development Manager at Warwickshire County Cricket Club, added: “It’s important to note that some pupils gain bursaries or scholarships to attend independent schools, but it is likely that young people from lower socio-economic backgrounds may encounter barriers prior to reaching an elite development standard.

“Limited access to transport to attend training or matches and the expense of equipment, coaching and playing fees could all become barriers to reaching that level.

“Warwickshire County Cricket Club is committed to finding contingency within its own budget or grant aid, the Brian Johnston Memorial Trust for example, to support talented individuals who need financial assistance in order to play representative cricket.”

More information about sport and exercise science at Birmingham City University can be found on the University’s website.