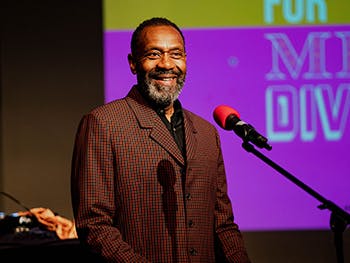 Birmingham City University's Sir Lenny Henry Centre for Media Diversity is carrying out new research to provide evidence aimed at lobbying the UK Government to introduce tax breaks that will encourage film and TV companies to put diversity at the centre of new productions.

Sir Lenny - broadcaster, activist, author, and Chancellor of Birmingham City University - announced the news with guests at an event marking the second anniversary of the Centre.

Developing research, data, and evidence around the positive impact of diversity tax breaks follows meetings between Sir Lenny and Downing Street, the Mayor of London, Scottish First Minister Nicola Sturgeon and the Treasury.

Guests at the second-anniversary event of the Centre, hosted at the University’s Parkside building, included Laurence Olivier award-winning actor Adrian Lester, Soul II Soul’s Jazzie B, senior executives from Channel 4, BBC, and ITV, and journalists, producers, editors and academics from across the UK.

Speaking at the anniversary celebrations, Sir Lenny said: “What I have learnt is that we must turn protest into progress. We need to transform our complaints about the lack of diversity into real tangible results.

We're doing great work, including consultancy for the Financial Times, Channel 4 and the BBC. This Centre has proved that change will happen; people are taking notice, broadcasters, newspapers and trade unions are all using our work to improve their policies and increase diversity.

The anniversary event, part of a wide-reaching events programme running up until November this year to celebrate the University’s 2025 Strategy, coincided with the arrival of the third edition of the Centre’s journal ‘Representology’ – a collaboration between industry professionals and media academics at Birmingham City University and Cardiff University.

The latest issue features an interview between Sir Lenny and founder of the MOBOs Kanya King; an article by Nadine White, the UK’s first race correspondent based at The Independent; in-depth research on Black and Asian representation in the entertainment unions by Dr Jack Newsinger and Riaz Meer, and Dr Jami Rogers on the industry's structural discrimination.

Representology Editor K Biswas said: “Away from the glare of artificial 'culture wars', Representology continues to publish ground-breaking work on media and diversity from leading experts and some of the biggest names in British culture. I'm proud that we're able to start new, challenging conversations about the role that press and broadcasting can play in reflecting the richness of our society.”

Since its inception almost two years ago, Birmingham City University has funded nine key research projects through its Sir Lenny Henry Centre for Media Diversity, including a collaboration with Cardiff University and work with Channel 4.

It carries out an array of independent activities including offering Practitioner Investigating Media Industry Diversity grants to industry professionals, while it aims to further expand its work to ensure the media better reflects UK society.