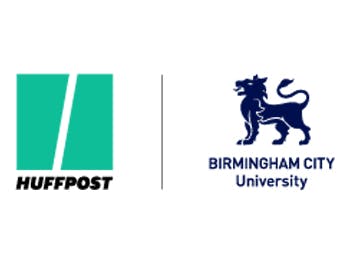 The HuffPost Centre for Journalism at Birmingham City University is the first partnership of its kind, giving students the chance to take advantage of a range of opportunities on a global scale.

With masterclasses and live briefs from the HuffPost team, our students will be able to experience the real-life thrills of working in a live newsroom environment as well as hearing from some of the leading names at the cutting edge of the journalism industry.

We love what Birmingham City University is about, with a really diverse student body and a focus on what students need to be employable and get the most out of their university experience.

Starting in September 2019, the partnership will see students receive tutorials focused on news, lifestyle politics and entertainment from the HuffPost UK team, whilst building on their ideas about how news is produced and consumed, and how stories are told across different platforms.

Take a look at some examples of projects students and staff have already been working on below:

Kirsty Card’s data and investigative journalism website, The Briti News, was shortlisted for two Midland Media Awards. Developed as a final year production project, Kirsty’s site featured examinations of a range of issues including immigration, catfishing and mental health, drawing on her skills in data visualisation and reporting to tell engaging and informative stories.

Steve Carufel’s use of immersive reporting techniques saw him create a feature around music used in video games. Using video, audio, in-depth interviews and long form feature writing, the MA Multiplatform and Mobile Journalism graduate took advantage of new forms of storytelling to create an engaging and immersive experience for the reader. He was also named as a finalist in the international Shorthand Awards for his work.

Dr. Dave Harte researches the emerging trend of local community ‘hyperlocal’ news websites and has published widely on the subject.

He was co-investigator on the UK Research Council funded project ‘Media, Community and the Creative Citizen’ where he led a research strand investigating the scale and value of hyperlocal news websites. He has also published on the role of social media in media education and managed funded research projects for the Communities and Culture Network, part of the UK Digital Economy research strand.

Dr. Harte is also one of the authors of ‘Hyperlocal Journalism: The decline of local newspapers and the rise of online community news’. This book investigates who is producing hyperlocal news and why, as well as production practices, models of community and participatory journalism, and the economics of hyperlocal operations.