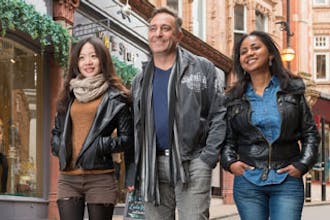 Birmingham is in England’s top three most-visited places to shop, and the Bullring has had markets since the 12th century.

You’ll find the city is a shoppers' paradise, with glossy, modern retail centres, restored Victorian arcades and a range of markets offering everything from designer labels to second-hand bargains.

The Bullring is one of the UK's most popular shopping destinations

Built at a cost of £500 million, it has more than 160 shops and restaurants covering an area equivalent to 26 football pitches.

All of the UK’s main high-street stores are present, along with smaller boutiques and special interest shops.

Digbeth is where you’ll find a mass of retailers, music shops and vintage fairs, while the underground Oasis market in the city centre showcases independent retailers and unique fashion.

On the opposite side of the city is the lavish Mailbox building, with its designer stores, boutiques, and restaurants, which is currently undergoing a £50m upgrade, due for completion later this year.

350,000 The city’s first John Lewis store, featuring more than 350,000 products, and the surrounding Grand Central development, are also both due to be completed in 2015.