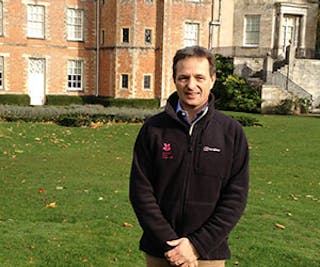 After his degree in economics led to a successful 25-year career in media and advertising, culminating in becoming Digital Director of Reed Business Information, Paul Cook is now lending his business knowledge and experience to the National Trust as general manager for the Mottisfont Estate and New Forest Northern Commons.

I was attracted to the course by the content and its flexibility - I was able to study what really interested me, but I was also able to make changes to my options if I found out about something new. Some lecturers were quite esteemed in their field, real advocates for economics and they made studying it very interesting. A lot of people left the course really enthused about the subject and wanting to do more, and I made some great friends who I'm still in touch with now."

Paul had ambitions to work in the City of London but, at the time, that was proving difficult so he took a sales job with Reed initially as a short-term measure, but says he got bitten by the media bug as Reed allowed him to gain experience in lots of different fields. From his role in telesales, he moved on to field sales and then management, getting involved in different projects and start-ups.

He joined advertising and communications agency Ogilvy & Mather for five years, covering everything from web and advertising to exhibitions for big-name brands like ICI, Rolls Royce and Hitachi, then returned to Reed as Group Sales Director, then website publishing director, and finally Digital Director. Having achieved everything he set out to do in his career, he faced the decision of whether to move to a similar role elsewhere or try something completely different - and opted for the latter.

He said: "Conservation is as different as you can get, but I love it - it's a very interesting environment, with so much variety and a very different culture and atmosphere because as well as around 40 staff, I have some 500 volunteers which is a very different management challenge, but it's really quite humbling how much support they give.

"I am managing within a framework, but all of the properties have a large degree of independence on a day to day basis. The support from the centre is great if you need it, in such fields as archaeology, conservation and curatorial, but you have the freedom to put your own stamp on things."