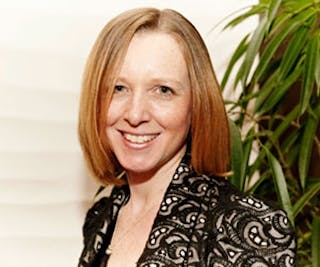 Davina Goodchild has built a successful career in the charity sector, and is currently Chief Executive of LionHeart, the benevolent fund for past and present members of the Royal Institute of Chartered Surveyors (RICS) and their families.

She was appointed to the role in 2011 after six years working with the Youth Action Network, during which time she worked to double the size of the organisation and secured both strategic and corporate funding for the first time in its history. Davina has also worked for Birmingham Voluntary Service Council, where she managed the volunteer centre and their volunteering projects.

Davina has always been interested in volunteering and charity work, firstly while she was studying for her undergraduate degree in Wales. It was there that she got involved in volunteering which she believes led her to secure her first job, working at the Trinity Centre homeless shelter in Digbeth, Birmingham.

From then on, Davina has developed her career working with different charities, and she further developed her knowledge by studying MSc Leadership and Change Management at Birmingham City University, graduating in 2009. She says her goal is to "ensure that the charities I work for offer a modern, effective service to the people they support and this can be evidenced effectively".

I chose the course because I wanted to go back to academic study but also wanted something that would be practical for work. I chose the university because it was nearby and it had the course I was looking for. I thought the teaching was excellent - the lecturers had the right mix of academic rigour I was looking for as well as real hands-on practical experience of the 'real world' to draw on - I felt that was important for this course."

She says the benefits of the course helped to develop her career and that without it, she would not have the job she does now: "I am sure that being able to speak with authority about both the practice and the theories of change management and leadership led to me securing the role that I am currently in."

She intends to continue enjoying working within the sector she is in, "making a difference and applying the learning and experience I have to help the organisations I work for achieve more and more".