1900s We're one of the longest-established and best-respected business schools in the UK. Our heritage in the city stretches right back to the early 1900s. 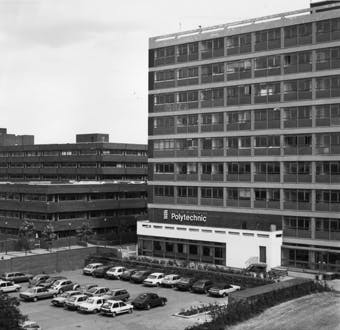 We began as the Birmingham College of Commerce in the early 20th Century. A prospectus of the College from 1934-35 shows a range of subjects that are not too dissimilar from the courses we offer today, including accountancy and business finance.

Even back then, industry leaders were debating the key topics of the day – including a public lecture on the “Present Economic Position of Great Britain.”

In the early 60s, the College of Commerce moved to the site of Birmingham Central Technical College, which itself had been opened by Her Majesty the Queen in 1955.

When elements of the Technical College changed in the late 60s, the College of Commerce remained separate, before becoming part of the City of Birmingham Polytechnic.

In 1992 the Polytechnic became the University of Central England in Birmingham, before changing its name to Birmingham City University in 2007.